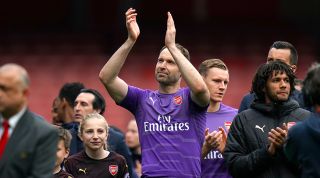 Always a good idea to butter up your new (old) employers before joining, right? With a great big “sod it”, Petr Cech has given a fine interview with the Evening Standard in which he questioned his current club’s hunger for the fight just days before Wednesday’s Europa League final against old club Chelsea.

“I think generally at Arsenal there is not enough pressure,” he said. “At Chelsea, at the times when we drew, it felt like a funeral in the dressing room. It was so bad.”

The outgoing keeper did add that his Gunners side are perfectly capable of pulling out a strong display against their league rivals, but it didn’t take a genius to determine what the Czech was getting at. Troy Deeney would approve.

But as Cech prepares to bid farewell, we thought we’d test you on his club career with both sides. We’re looking for the 50 players who he’s shared a pitch with most frequently at club level from 2004 to now, and giving you 10 minutes to get it done.

After you’ve finished, tell us how you got on with a screenshot (no spoilers) @FourFourTwo and we’ll retweet your scores to the masses. Good luck!

QUIZ Can you name the Chelsea squad that won the Europa League in 2013?