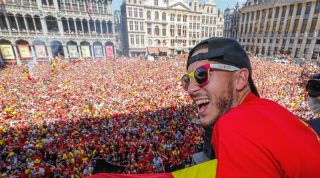 The World Cup is over for another four years and we’ll miss that crazy lunatic. Football didn’t quite come home – unless you live in the Pays de la Loire or thereabouts – but it sure was a lot of fun.

There was plenty of goals about with just one 0-0 draw throughout the tournament (France’s stalemate with Denmark). Even the final itself delivered six goals, helped by an own goal, a goalkeeper blunder and a dodgy VAR penalty – all hallmarks of this World Cup.

These players also had tournaments to remember to varying degrees. Each contributed to at least three goals for their teams via either scoring or assisting (note: earning a penalty counts as an assist), including the top pair who helped deliver  onsix goals apiece.

We’ve put each player’s nation and goals + assists tally below. All you need to do is fill in their surname, then tell us how you got on @FourFourTwo – we’ll retweet the best, if you don’t give answers away. Please challenge some pals while you’re at it too. Farewell, Russia!