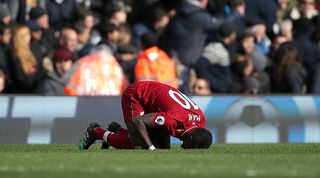 We're now fast approaching 50 African players who've scored at least 15 goals in the Premier League – and can EXCLUSIVELY* REVEAL that Liverpool's in-form Sadio Mané is one of them. Sorry, spoiler alert.

After a record-breaking campaign from Mo Salah last season, Mané has often been the man that Jurgen Klopp's side have looked to for a deadly touch this term – he's only one behind the Egyptian on 17 Premier League goals this campaign, ahead of Liverpool's humongous tussle with Chelsea at Anfield on Sunday.

SEE ALSO The Slip, five years on: why Chelsea are no longer the enemy for Liverpool in 2019

But how many of these other African hotshots can you recall in this quiz?

We've put 10 minutes on the clock for you to name as many as you can – it's a toughie, but see how you go. After you're done, let us know how you got on @FourFourTwo on Twitter with some proof of your accomplishments (we'll retweet the best scores – but don't give away answers, of course). After that, challenge your mates to see if they can do better...

QUIZ! Can you name the 59 outfield players with 30+ Premier League appearances this season?