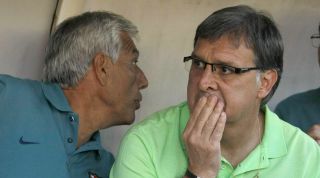 Like facing a particular challenging set of Ikea shelves that happen to cost €100 million, Real Madrid’s doctors and trainers are scratching their heads trying to figure out Gareth Bale’s instruction manual. The latest assumption is that some nuts and bolts may be missing, and a stroppy trip to the footballing warehouse might be required.

The big task for Madrid is to use the international break to get the absent Welshman ready for the next league clash against Málaga, or at least the Clásico coming up a week after that. The club's first victory was persuading the Welsh FA that the best place for the 24-year-old was in the Spanish capital with Madrid’s tracksuit-clad egg heads.

After all, all able hands to the pump are necessary if a currently discombobulated Madrid are not to fall even further behind the league leaders. There's a bit of push in the city for some of those jiggling hands to be young ones (this metaphor better be abandoned right about now), which is the normal reaction in Spain when things aren’t working out with the first teamers.

The impacts of Jesé and Alvaro Morata in the fluky win over Levante were hailed by Marca, which plonked the pair on the front cover of Tuesday’s edition. It is the deep-held belief that local lads brought through the youth system are always going to be better those weirdo outsiders who don’t know the ways of the Santiago Bernabéu. Unless Florentino Pérez bought them, of course.

Valencia, meanwhile, are using the break to rid themselves of some unwanted clutter, with defender Adil Rami set to be joining AC Milan according to AS. The defender has just completed a week’s suspension after some public criticism of manager Miroslav Djukic, and now looks set to be shoved out temporarily to the Serie A club with an option to buy.

Down south, the second sacking of the season in La Primera may well be at Almería. The club president had previously been very supportive of his rookie manager Francisco Rodriguez, with promises of everlasting backing. But now that hand on the shoulder has turned into a vice-like Vulcan death grip, with Alfonso García getting his panties in a bunch over the bottom side constantly throwing away leads and points.

Almería are currently the only top-flight side without a win, which is an understandable source of frustration for García. After Sunday’s 2-1 defeat to Sevilla, decided in the final seconds, the team’s big cheese ranted that he was going to speak to his manager to find out what was going on. “There is something wrong at Almería,” fumed García, “I am worried. We are getting worse every time.”

However, some of the players have warned that any drastic move would be a bad plan. “It would be a mistake to change the manager,” quipped defender Hernán Pellerano.

Over in Barcelona, one of the big mysteries of the season has been revealed – the story behind Tata Martino’s striking lime green polo shirt that the manager is so fond of wearing on match days. “My wife bought it for me on the first day we came to Barcelona. It’s becoming fashionable as I have seen a lot of people wearing it in the street,” revealed the Argentine when quizzed on the matter.

So, with one comment, Tata revealed that the good folk of Cataluyna have the same debatable fashion sense as the rest of Spain. Never mind.