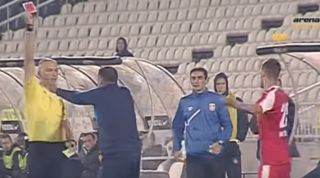 In the 27th minute, Boranijasevic was caught moving up the touchline with the ball, which clearly irritated referee Novica Andelovski to the point that he dished out a yellow card. But that wasn't the end of it.

The 25-year-old defender was so enraged that he chucked the ball away in anger – and because of his actions, was handed a second yellow card.

Boranijasevic then had to complete his walk of shame across the full length of the pitch, giving him plenty of time to think about what had just happened.

Despite going down to 10 men, Napredak went 1-0 up on the stroke of half-time before being cruelly denied victory by an Everton Luiz strike in the 96th minute. Ouch.