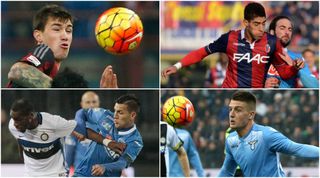 The Premier League is generally not a happy hunting ground for former Serie A players - for every Gianfranco Zola there’s an Emanuele Giaccherini. The top tier of Italian football nonetheless continues to provide a steady source of talent for relatively reasonable fees, it’s simply a question of choosing the right player.

Here are seven Serie A starlets, all 22 years old or under, who could be perfectly suited to Premier League football.

After impressing on loan with Sampdoria last season, Romagnoli came to be widely accepted as a hugely important component in the future of the Italian national team.

Returning to Roma, the club whose youth system he came through, the 21-year-old centre-back was a wanted man. After a dogged pursuit, Milan signed him for a €25 million fee. Since joining the Rossoneri he has matured, adding a greater physical edge and leadership quality to his burgeoning technique.

Any team that takes pride in bringing the ball out from the back. Romagnoli has a refined left foot and a good range of passing. Additionally, he is rarely flustered under pressure. However it’s worth noting that he’s no John Stones, he will clear his lines when necessary.

Given that he would command a high transfer fee, Romagnoli is only likely to be brought to England by one of the country’s elite. Given their style of play and financial riches, Arsenal could be ideal for him.

After breaking into Bologna’s first team during their promotion voyage last season, 22-year-old left-back Masina has enjoyed a stunning debut campaign in Serie A.

Born in Morocco but eligible to play for Italy, he was called into the Azzurri’s Under-21 squad thanks to his impressive displays at club level, where he has played a key role in pushing Bologna up the table since Roberto Donadoni took the reins in October.

There is even hushed talk of him being an outsider for Antonio Conte’s full national team ahead of this summer’s European Championships.

Any team who appreciates defensive contribution from their full-backs. Masina is an energetic presence and provides plenty of cut and thrust down the left flank, but he isn’t found wanting defensively. He's tall, strong and good in the air, making him a capable all-rounder for his position.

Chelsea could do with a left-back and their backline also needs an injection of pace. Furthermore, they prefer their full-backs to combine sound defending with forward raids. Masina ticks all the boxes.

Gnoukouri’s rise to prominence has been an unorthodox one. After being released by Marseille, the Ivorian made his way to Italy, where he settled in the regional leagues.

From there he impressed Inter, who he joined in 2014. Within a few months of his arriving at the Nerazzurri Roberto Mancini was back in charge at the club and, after the esteemed coach had taken a liking to Gnoukouri, he handed him his full debut in a Milan derby.

Since then, the 19-year-old has been handled with care but he remains an outstanding prospect and is ready to step up.

Any team that wants some composure in midfield. Gnoukouri has excellent physical attributes for his age, but it’s his calmness on the ball that stands out the most. He has a languid, unhurried style and is always willing and able to wait a few extra seconds to find the right pass.

Given Victor Wanyama’s proliferation of red cards this season, Southampton may be on the lookout for a more subtle midfield presence. Gnoukouri could provide just that.

Loaned to Empoli for the 2015-16 campaign, Leandro Paredes’ mission was simple. If he could establish himself as a Serie A player, he would then return to Roma, his parent club, more experienced and better prepared for the rigours of regular first-team football.

The 21-year-old has exceeded expectations. Playing at the base of Marco Giampaolo’s midfield diamond he has poked, prodded and pinged passes over and through opposition lines with a vision and accuracy that some might deem ‘Pirlo-esque’. As a result, he undoubtedly warrants first-team football with a bigger club going forward, only now that may not be with Roma.

Any team in pursuit of a midfield pivot who can play vertically. Paredes isn’t one of those deep-lying midfielders that simply looks to ‘get and give’; he’s always searching for a forward pass to open up an opponent. His exquisite ball control in tight spaces and creative instincts enable him to do this on a frequent basis.

It’s no surprise that Manchester City are one of several clubs to have been linked with the Argentine. In the summer, Pep Guardiola will begin his next project at the Etihad and he will want a deep-lying midfielder with more imagination than the functional Fernandinho and Fernando. Paredes would be ideal for the Catalan’s style.

After one season with Genk in Belgium, Sergej Milinkovic-Savic alerted the attention of scouts across Europe with his showings for Serbia in the 2015 Under-20 World Cup.

He helped his country to victory that summer, earning the Bronze Ball for his individual contribution to the success. Lazio then beat Fiorentina to snare the 21-year-old’s signature and he has had little difficulty adjusting to Italian football; his concoction of physical and technical gifts allowing him to stamp his mark.

Any team hoping to match style with substance. Standing at 6’3”, it would be easy to label Milinkovic-Savic as nothing more than a workhorse with good strength and an aerial threat. However, he also brings flair and class to proceedings whether he’s playing in the heart of midfield or behind a striker.

Mark Hughes has achieved his objective of adding finesse to a Stoke side formerly renowned for their brutish long-ball style. Now, the Potters have a potent blend of elegance and bite. As a one-man microcosm of this combination, Milinkovic-Savic would be perfectly suited to Hughes’ aims.

After years of flattering to deceive, Piotr Zielinski, like the aforementioned Paredes, found himself on loan at Empoli this season with the hope of progressing his career.

The 21-year-old Polish international was touted as a hot prospect at Udinese but didn’t quite kick on as was initially envisioned. At Empoli, however, he has finally begun to fulfil his potential. Playing on the right of a diamond midfield, his verve and creativity have been integral to the club’s surprisingly successful campaign.

Any team in need of energy in midfield. Zielinski sets a high tempo with his voracious work ethic and enthusiasm. While blessed with plenty of technical and attacking qualities, he does not eschew defensive tasks, making him a real team player.

Jurgen Klopp has a fondness for Polish players, having worked with Lukasz Piszczek, Jakub Blaszyczykowski and Robert Lewandowksi at Dortmund, so it should come as no surprise that he reportedly has his eye on Zielinski as he attempts to kick-start his Liverpool revolution.

And, with his driving runs, slick passes and discipline, the youngster could suit Klopp’s gegenpressing philosophy well.

Having worked his way up the Italian football ladder through Lega Pro with Albinoleffe and Palermo in Serie B, Andrea Belotti now finds himself leading the line for Torino in Serie A.

At 22 years of age, he has forced his way into the limelight through relentless graft and a desire to improve. While not a prolific scorer, the broad-shouldered frontman is an increasingly imposing physical force capable of holding up the ball and bringing team-mates into play.

Any team that wants to defend from the front. Belotti provides hard running, solid positioning and astute awareness without the ball, working doggedly to make opposition defenders sweat.

Torino don’t sell their best players unless they receive notable bids, but Belotti should be accessible to most Premier League sides given their significant television revenues.

As well as being financially viable, the indefatigable striker’s selfless attitude would be well suited to mid-table battlers who do not prize possession. Tony Pulis’ West Brom should take note.