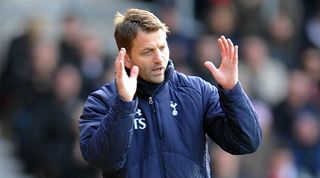 Tim Sherwood has told friends that his Christmas present for Tottenham chairman Daniel Levy may not be good enough, compared to Levy’s generous gift of the Tottenham manager’s job.

After much indecision, Sherwood gave Levy a box set of American TV show Deadwood, figuring that since the 51-year old executive had never mentioned it in conversation, he presumably hadn’t watched it.

“I’d heard decent things about it,” said Sherwood, who also hasn’t watched it. “And it wasn’t cheap – most people would say spending £39.99 is pretty generous. But then, so is appointing me manager of Tottenham Hotspur.”

Tottenham appointed Sherwood on December 23rd despite his lack of managerial experience or formal qualifications, a debt the former midfielder is starting to think may be harder to repay than he first assumed.

“I was thinking, what’s basically as good as being Tottenham manager, and naturally the first thing that came to mind was an HBO drama, because they’re pretty good. But maybe I should have got D-Lev [Daniel Levy] something really good, like monogrammed cufflinks, or a juicer.”

Sherwood admitted that concerns about the suitability of his present have prevented him from truly enjoying the festive period.

“Christmas is meant to be a joyful time, but all I could think about is ‘maybe the Leveret [Daniel Levy] won’t enjoy the story of a wild west gold mining town in 1870s Dakota. Maybe he’d have preferred something like a nice plate, with flowers on it or something. Maybe he’ll take one look at [Deadwood star] Ian McShane and start to have second thoughts about giving me the Spurs job.

“It spoiled the whole week, to be honest. I barely touched my turkey. I spent New Year’s Eve looking up vintage sunglasses on eBay. Maybe it’s too late now, anyway. When’s his birthday again?”

The pair are due to meet on Saturday after Spurs’ clash with Crystal Palace, when Sherwood plans to present Levy with an additional present, though he still has no idea precisely what this will be. Despite having worked alongside Levy since rejoining Spurs as a coach in 2008, the 44-year old admits he does not know his boss particularly well, and that his tastes and interests remain obscure to him.

“A tie? A hat? The Leviathan [Daniel Levy] would look good with a hat. Maybe a book? But what if he’s already got a book? How can this be so hard?”

Having also rejected a bottle of whisky as “too clichéd” and a vial of his own lilywhite blood as “too weird,” Sherwood was forced to admit defeat.

“I’ve thought about nothing else all week. I’ve done no baking, no carol singing, no preparation for the Palace game. What made it even worse was that with André [Villas-Boas] gone, I had no-one to give this £5 TK Maxx voucher to.”

Unconfirmed reports indicate that Sherwood was spotted leaving a branch of Morrisons early this morning armed with an extra-large block of mild cheddar.