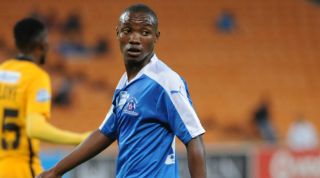 The 21-year-old Ntshangase was playing against SAB League side Arsenal in Pietermaritzburg on Thursday when he was struck by lightning – which left him and several of his team-mates unconscious.

The South Africa youth international was rushed to a nearby hospital, where he was placed into a coma.

And now Maritzburg United coach Fadlu Davids is asking for the football community to pray for their young striker.

"He is still in ICU," Davids told Kick Off after his side's goalless draw with SuperSport United at Lucas Moripe Stadium on Saturday.

"We are asking the whole football fraternity to please pray for him so he can make a speedy recovery."

Arsenal's Samkelo Nzimande, Ncebo Ngcobo and Njabulo Madlala were also knocked unconscious, but they have all recovered and been discharged.

Their coach Mondli Dlamini added: "We were not aware and the weather just changed, and when it rained it was also thunderstorming.

"When the referee was about to call off the game, then the lightning struck. I also don't remember very well what happened because I also saw other players on the floor after the thunderstorm.

"When we took them off the field they were unconscious and they only woke up when they were in hospital. But their situation was not as bad as first feared."