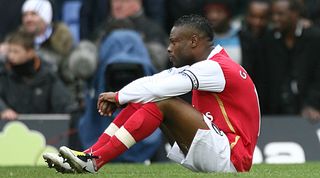 Having won 10 of the last 15 league titles, Liverpool went into the 1990/91 season as favourites to finish top of the pile once more. A run of eight consecutive wins at the start of the campaign did nothing to suggest they would fall short, with a 4-0 thrashing of Manchester United at Anfield setting the tone for their early-season form.

By mid-November they'd won 12 of their 13 matches, the only slip-up coming in a 1-1 draw at Manchester City. But after sitting pretty at the summit for Christmas, the Reds wobbled with only one victory in six as the new calendars came out. Kenny Dalglish resigned in February citing personal issues, and a 1-0 defeat to Arsenal in early March mean the Gunners leapfrogged Liverpool to take top spot.

The Reds – led initially by caretaker Ronnie Moran and then Graeme Souness from April onwards – were hugely inconsistent in the final 12 games of the season, beating Derby County 7-1 and Leeds United 5-4 but dropping vital points at home to QPR and Coventry City. Arsenal romped home, finishing the season seven points clear. Liverpool still haven’t won the league since.

Having finished third in Rinus Michels’ first season at the Camp Nou in 1971/72, Barcelona were looking to push on and win the title a year later. A squad that contained the likes of Juan Manuel Asensi, Marcial and Gallego certainly had the quality to go the distance, even if the Spanish top flight was by no means a two-horse race in those days – Valencia, Real Madrid and Atletico Madrid had passed the league championship title around over the three previous campaigns.

Michels’ men got off to a flyer, winning their first five matches – including defeats of Valencia and arch enemies Madrid – and laying down an early marker to the rest of the division. A draw to Catalan rivals Espanyol followed in their next encounter, but victory over Athletic Bilbao had Barça perched atop the table by late October.

Chinks in the armour began to appear soon after, however. Draws against Malaga, Celta Vigo and Sporting Gijon cost the Catalans precious points, and in the end Atletico’s superior ability to turn draws into wins meant they took the title ahead of Michels’ runners-up by a narrow margin of two points.

The sale of club legend Thierry Henry to Barcelona ahead of the 2007/08 campaign didn't seem to affect Arsenal, who came flying out of the traps with eight wins in their first nine Premier League games. Draws with Liverpool and Manchester United were respectable results in their next two matches, particularly when the Gunners followed them up with successive triumphs over Reading, Wigan and Aston Villa. At the start of December, Arsenal had a five-point gap over second-placed Chelsea, plus a game in hand.

The collapse didn't come until late February, beginning with a fateful 2-2 draw at Birmingham memorable for Eduardo’s horror injury and captain William Gallas’s solitary protest in the centre circle following the contentious awarding of a late penalty. A run of only one win in eight allowed Manchester United to steal in and take the crown, with Arsenal finishing the season behind Chelsea in third.

Winning seven Bundesliga titles in a row is par for the course where Bayern Munich are concerned these days, but in the mid-1990s – when the Bavarians had won only one since the turn of the decade – it would have been craved. Seven straight wins put a Bayern side that featured Jurgen Klinsmann, Didi Hamann, Lothar Matthaus and Oliver Kahn in a strong position in the first few weeks of 1995/96, but it ultimately counted for nothing as they let their lead at the top gradually slip away.

Three defeats in six autumn fixtures undid some of their good early work, before a total collapse late on – Bayern won just two of their final nine matches – effectively handed the title to Borussia Dortmund. Even the brief return of Franz Beckenbauer as manager in late April couldn't reverse the decline.

The Giallorossi's start to 2013/14 could hardly have been better. Livorno, Verona, Parma, Lazio, Sampdoria, Bologna, Inter, Napoli, Udinese and Chievo were all beaten as Roma scored 24 goals and conceded just one.

The capital club’s biggest problem was that, despite their perfect start, champions Juventus were still only two points behind them at the start of November. Four draws in a row maintained Roma’s unbeaten record, but allowed Antonio Conte’s side to retake top spot – a position they'd barely relinquished since 2011.

Roma’s final points tally of 85 and goal difference of +47 would have been enough to win Serie A in five of the previous six seasons, but Juventus’s relentless excellence meant the Old Lady finished an incredible 17 points ahead of Rudi Garcia’s runners-up.

Wolves came close to winning their maiden First Division championship in 1947/48, the season that marked the return of Football League action following the end of the Second World War.

Finishing a single point behind champions Liverpool would have hurt, but the West Midlanders continued to compete in the next two seasons and made a fine start to the 1949/50 campaign as they sought a first taste of league glory.

The only points they dropped in their first nine clashes came in a 1-1 draw with Birmingham. By the beginning of October, Wolves were already four points clear of Liverpool at the top, in the days of two for a win.

A major dip soon followed, though, and Stan Cullis’s side went 12 miserable games without victory between October and December. They got their act together thereafter, but the damage had already been done: despite a wonderful start to the season, Wolves cruelly lost out to Portsmouth on goal average and finished second.

QUIZ! Can you name the 71 English players who've appeared in every Premier League game this season?