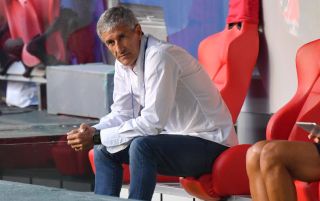 The appointment of Quique Setien as Barcelona manager in January was supposed to herald the start of an exciting new era at the Camp Nou.

But defeats to Athletic Bilbao in the Copa Del Rey and to Real Madrid in March's Clasico quickly saw the shine taken off Setien’s arrival at the club.

Los Blancos then sealed the title, Barça were dumped out of the Champions League 8-2 by Bayern Munich and apparently serious rumours about Lionel Messi's future in Catalonia leave the club in a sorry state. This is now the first completely trophyless season since before Pep Guardiola's revolution in the late 2000s.

Setien will not be Los Cules' manager much longer – if he hasn't already been given the Barcelona boot by the time you read this – and if this is how his reign ends, he will probably have earned a place on this list.

But for now, here's the worst Barcelona managers of all time...

Weisweiler arrived at the Nou Camp fresh from winning the UEFA Cup with Borussia Monchengladbach. A two-time Bundesliga winner, the German nevertheless had big shoes to fill as a replacement for the outgoing Rinus Michels.

Appointed with the aim of delivering silverware, his task was made difficult when star playmaker Johan Cruyff took an instant dislike to his strict methods.

"Weisweiler is not the manager of my choice", the Dutchman declared upon his arrival. A civil war ensued at the club, from which there was only ever likely to be one winner. Weisweiler left after a single, trophyless season.

A Barcelona legend as a player, Kubala enjoyed two underwhelming spells in the Camp Nou dugout but it was his second stint that proved disastrous.

The Hungarian first courted controversy by announcing his intentions to take over at Barca while still at the helm of a Spain national team heading into the 1980 European Championships.

Spain finished bottom of their group but things got even worse for Kubala in Catalunya. The Hungarian lost six of his 13 hapless games in charge with the final straw coming after a shock 4-0 home defeat to Cologne in the UEFA Cup.

A former Real Betis manager and youth team coach prior to succeeding Louis van Gaal at Barcelona in 2000, Ferrer sparked concern among his players over his capabilities as early as pre-season after asking new signing Emmanuel Petit what position he played.

With Barca still reeling from Luis Figo's move to Real Madrid, Ferrer struggled to get the best out of replacement Marc Overmars and the rest of his squad with Barcelona crashing out of the Champions League and UEFA Cup at the hands of Leeds United and Liverpool respectively.

He was sacked after a 3-1 defeat to lowly Osasuna with Barcelona down in fifth.

Van Gaal won back-to-back La Liga titles and a Copa del Rey during his first spell in charge of Barca but couldn’t repeat the trick the second time.

In his absence, Barcelona had gone two more seasons without a trophy and in desperation, President Joan Gaspart turned to the Dutchman for help. He would live to regret it.

Van Gaal caused chaos, releasing star man Rivaldo on a free, despite the Brazilian having a year to run on his contract, and replacing him with new signing Juan Roman Riquelme, who was played out of position as a winger despite making his name with Boca Juniors as a playmaker.

The Dutchman lasted 30 games and won six times in La Liga. By the time he left, Barcelona were just three points above the relegation zone and 20 points off the top.

ALSO READ Is Pep Guardiola holding Manchester City back in the Champions League?

A break from the Barcelona tradition of promoting from within, Martino was recruited off the back of success with Newell’s Old Boys in Argentina and, like Pep Guardiola, was a disciple of Marcelo Bielsa’s footballing philosophy.

Unlike Guardiola, however, Martino failed to get a talented Barcelona team playing with any identity, losing the Copa del Rey final to Real Madrid and missing out on La Liga and Champions League glory thanks to Atletico Madrid. Martino later described his time at Barca as “an utter failure”.

"If Barça had played their own style but not won the title, it wouldn't have been a failure," he said. "But we didn't win and we didn't play well either."