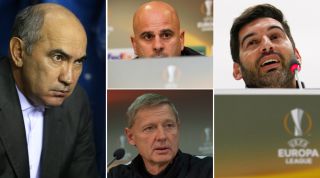 Pep Guardiola: “At half-time when you had played badly, you expected to get an earful and be told to push yourself and fight more. Johan Cruyff told you that you were playing badly because you were running too much. You had to send the ball where you wanted it to go and not to run after it.

“Lionel Messi is the (Barcelona) player who runs the least and in that he was Cruyff's best pupil. He told you completely the opposite to what you had always learned.”

1. The underdogs doing bits in Portugal

It’s worth pricking up both ears for an underdog that reaches its domestic cup final, the league cup semi-final and the Europa League quarter-finals against all expectations.

Paulo Fonseca is thoroughly and very successfully leading his charges at Braga. Toppling the towering triumvirate of Porto, Benfica and Sporting is a dream barely worth considering usually, and so that is the case again this season.

So it’s 4th place and all guns blazing in the cup competitions for a manager who cut his managerial teeth at northern club Pacos de Ferreira. A phenomenal run in the Primeira Liga qualified Pacos for the 2013/14 Champions League for the first time – and it didn’t go unnoticed. Next stop was Porto, but it proved a step too far and Fonseca was sacked less than nine months later.

Porto may rue their hasty decision as they await Fonseca’s Braga in the final of the Portuguese Cup. Victory would represent Braga’s greatest achievement, and another feather in Fonseca’s history-making cap.

Bragging rights have already surfaced in the press as Braga ventured further than Porto – and Sporting – in the Europa League. A stunning 4-2 aggregate win for Fonseca’s men over Fenerbahce (managed by fellow Portuguese Vitor Pereira) was the unsung result of the last round. Nani, Robin van Persie & Co. were overwhelmingly outclassed in the second leg inside the compact furnace of the Estadio Municipal de Braga.

Mircea Lucescu’s Shakhtar Donetsk – whose domestic form has been poor following Alex Texeira’s departure – await Braga in the quarter-finals. It’s an intriguing contest between two managers separated by experience and a catalogue of major trophies; the underdog’s bark vs the older dog’s bite. Who will be more inspired?

If football’s equivalent of climbing Mount Everest is winning the top-flight league title with two clubs, it’s little wonder only four managers have achieved this feat in 127 years on English shores. Many illustrious names legitimately considered ‘great’ missed out in this category.

Throughout Europe too, a two-club championship-winning manager is a rare breed. But one manager is on the verge of doing so with one unique and extraordinary difference: winning a championship with two clubs for the first time in each of their histories.

Kurban Berdyev led Rubin Kazan to its first Russian championship in 2008. Retaining it the following year was considered an even greater coup, as the Russian press lavished him with status unequalled by the perennial winners from Moscow and St Petersburg.

And yet no result along the road could match one from October 2009, when his Rubin beat Pep Guardiola’s Barcelona 2-1 in the Camp Nou. Their performance against Toure, Messi, Iniesta, Xavi & Co. was outstanding, and remains forever etched in the memories of Rubin Kazan supporters.

Berdyev now has a chance of winning another Russian title for the first time with FC Rostov. Lying 2nd in the table just two points adrift of Leonid Slutsky’s CSKA Moscow, the order of usurping their rivals is very tall indeed, but a recent 2-0 victory over CSKA has given Rostov supporters serious hope.

Sparta Prague’s recent 3-0 Europa League battering of Lazio in Rome, a feat unprecedented in European competition since 1975, bore the hallmark of a team led by a wise head.

After a hard-fought 1-1 draw at home to Lazio in the first leg, 58-year-old Zdenek Scasny instructed his Spartan cavaliers to attack from the off. They responded emphatically, annihilating their Italian hosts with a three-goal blitz in the first half.

This was a remarkable performance from a team that have yet to lose in this season’s competition, and from a manager who is happy to receive little attention outside the Czech Republic. “With the passage of time, we believe more and more,” he declared. “I consider this to be the biggest win in my coaching career.”

Scasny is now aiming to secure his first Czech championship since leading Sparta to back-to-back titles... 17 years ago. The capital club have won far more league titles than any other rival (nine), but Scasny has ensured his team remained focused on both fronts; three days after defeating Lazio, he led his team to a 3-1 win in a fiercely contested battle with local rivals Slavia Prague. Sparta are now six points behind leaders Viktoria Plzen with a game in hand.

Three matches will define Scasny’s season: Viktoria Plzen at home in April and two matches against Villarreal in the Europa League quarter-finals. Victory against the Spanish side would be Sparta’s first appearance in a European semi-final since 1972.

Battle of the month: strugglers scrap in Germany

In the Bundesliga, five teams are separated by just one point in the tightest relegation battle on the continent. And not just any teams either: Augsburg finished 5th last season; Eintracht Frankfurt and Werder Bremen are trophy-winning clubs, not only domestically but in Europe too; Darmstadt and Hoffenheim were considered the more likely for relegation at the start of the season.

Pressure found its most high-profile victim in Huub Stevens, who was recruited by Hoffenheim in October before resigning in February after a series of poor results. In came the 28-year-old Julian Nagelsmann, who has managed four wins from his first seven games.

There are several six-pointers between these five teams as we venture towards the season’s end. The clash that the German press are already discussing is between Werder Bremen and Eintracht Frankfurt on the final day of the season, a match both clubs will be hoping loses its importance between now and then, but one which neutrals will be hoping becomes a relegation win-or-bust thriller.

Title-deciding battles to watch in April