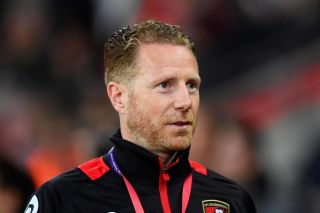 Back in February, Weymouth head coach Mark Molesley kindly invited FourFourTwo down to watch a training session. It was fast-paced, slick and meticulously planned. Most importantly, The Terras would follow it up by winning that weekend.

And they kept on winning, too. They would remain undefeated in National League South until, abruptly, the season and the wider world came to a juddering halt. When the pandemic forced England into lockdown, Weymouth were sat in third place, with the joint best defensive record in the division.

Three months on, life is different. Molesley isn’t leading his players through one of his sessions, but at home on the other end of a Zoom call, legally unable to prepare for what would be a decisive point in the club’s history.

Both the National League South and North clubs have voted in favour of finishing their season with a play-off tournament – league leaders Wealdstone and Kings Lynn have been promoted automatically – and, after a considerable bureaucratic flip-flop, the six teams placed 2nd to 7th in each league will now have their chance at promotion. For Weymouth, pending the outcome of a quarter-final between Bath City and Dorking Wanderers, that will mean a semi-final on either July 25 or 26.

But while that’s barely a month away, there are still significant issues to overcome and no defined parameters within which the team can prepare. Next week, in line with government guidelines, informal sessions can take place with no more than six players taking part and with social distancing measures in place. Beyond that, however, it will depend – and, as Moleslely describes, the ad hoc nature of this process is not only difficult to plan around, but has also been a theme of these past few months and, ultimately, a reminder of Weymouth’s place in the food chain.

“The most difficult thing is not being able to plan or prepare with any date, or not knowing whether it’s going to be on or off.  We’ve been waiting a long time to have some sort of clarity on how this season’s going to finish.

"I understand why we’ve been waiting, but information coming back and forth hasn’t been the best.”

These stories are now familiar. The dozens of features written about Premier League clubs over this period have all painted more or less the same picture – of players carrying out bespoke fitness programmes at home, of gym equipment being delivered and of meticulous planning around a well-organised restart.

For Weymouth it’s been different. Players are doing their own light fitness work at home, but that preparation has had to occur around other, more pressing concerns. “The wonderful thing about Weymouth”, Molesley says, “is that there are all sorts of vocations represented within our squad. We have coaches, estate agents, carpenters and electricians”.

He’s right. Journalists are biased towards the people and the organisations that grant them access, but anyone who has spent any time around the club and its players would attest to its infectious atmosphere. Even those who haven’t would surely be impressed by the progress under Molesley; should Weymouth win this playoff tournament, it would be a second promotion in as many years.

As true as that is, though, and as professional an environment as has been created, this is still a part of the world where footballing ambition is in conflict with the realities of life outside the Football League. Particularly now and, while a plan does exist, a return to competition is not yet a certainty.

“We won’t be allowed to train until we get the testing in place”, Molesley confirms, “and we’re waiting to find out how the FA want us to test and when they want us to do it.”

It’s more complicated than it sounds. Before that can happen, clubs must show that they have the financial capacity to bear the costs of those testing programmes. If they can’t, they won’t just be eliminated on a case-by-case basis, the entire post-season program could collapse, floundering from a loss of integrity.

It’s right that it should be that way, because promotion should always be a sporting contest, but it makes this situation perilous. The clubs have been advised by The FA that they will each need to raise as much as £50,000 each to cover those expenses. Easier for some than others, of course, but a huge sum of money for anyone given the current state of the world outside.

Those expenses will include deep-cleaning of the grounds and the training facilities. Safety officers will need to be employed too and, of course, testing kits will need to be purchased in bulk. For some clubs, with well-developed, almost entirely professional structures, that won’t prove as much of a burden. For Weymouth, where there is no benefactor, no quick source of cash and where the wounds of a previous regime’s mismanagement are still yet to full heal, it’s a different proposition entirely.

They will also, quite obviously, have to raise that money without the prospect of selling a single match ticket. The club are continuing to be creative in their response and, as a first step, a GoFundMe - which you can see here - campaign has raised over £6,000 in its first 24 hours online. It’s a measure of the situation’s urgency, but also – in a more abstract way – it describes the work that has gone into the club’s resurgence, and the depth of feeling that that its progress continues to inspire.

“People have worked so hard just to ensure there is a football club,” Molesley says. “We’ve also worked so hard as a group and my players deserve the chance to play out this season.”

He’s right, again. They do deserve that chance and, with the support of fans and the broader community, they and the rest of the teams in their division will hopefully get it.