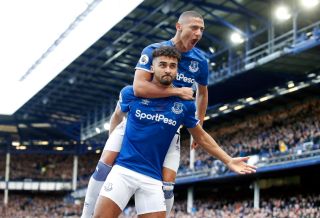 Players don’t really have the capacity to surprise you anymore. Once upon a time, they would reveal themselves in stages, over seasons and years. A youngster would take his first steps in senior football, with his shirt hanging off him and his shorts below his knees and give little or no indication of what he might eventually become.

Now, that’s no longer true. A player’s rise is publicly charted from 16 onwards, meaning that he has a theoretical outline almost from Year Zero. The hazards of development remain the same and the pathways into the senior game are as narrow as ever – narrower, even – but for most players, certainly those at the biggest clubs, there exists a predetermined idea of what they’re supposed to evolve into.

So far, Dominic Calvert-Lewin’s career hasn’t conformed to that. Even now, at 23 and having played over 100 Premier League games, there’s no real indication of just how good he might become. The lack of rhyme or reason in his goalscoring record bears that out: one in his first became four in his second, six in his third is now thirteen and counting in his fourth.

The point is, at no stage have those little jumps felt inevitable. Calvert-Lewin isn’t an example of a forward who, in his earliest Everton days, just needed a little more of ‘this’ or ‘that’ to become prolific. Had the season not been suspended, we’re led to believe that he would have been called up to the England squad by Gareth Southgate. Again, even as recently as a year ago, that would have seemed very unlikely.

His aesthetics are partly behind that: at first glance, Calvert-Lewin is quite scruffy. He has those long legs which make even smart bits of skill seem clumsy and imprecise and the goals he does score are rarely pretty. That’s not a criticism. Actually, it’s a commentary on how enslaved to style we’ve all become and how we’ve learned to applaud only the smoothest passages of football.

The result, though, is that the instructive moments of Calvert-Lewin’s career to this point have gone overlooked – or, at least, certainly haven’t been applauded in the way they should have been.

There are lots of those. His flick against Crystal Palace, for instance, which set Richarlison away to score in front of the Park End stand. Or the quick body adjustment to score that back-post header at London Stadium, against West Ham. Or the chopped first goal at St James’ Park, or even the movement for that scuffed, sliding second. Those were all big tells; each of them exhibited some fundamental of modern centre-forward play which was worth greater reflection.

Chief among them might actually have been a bit of interplay between him and Theo Walcott at Turf Moor. Calvert-Lewin received the ball with his back to goal, surrounded by a horde of Burnley centre-halves, and dropped a pass first-time up and over the defensive line, and into Walcott’s stride.

Had the winger been more accurate with his lashed cross it would have been one of Everton’s slickest goals of the season, but as it was – typically – it was just another Calvert-Lewin moment forgotten by anyone who wasn’t there that day.

But it was outstanding play. It was imaginative, quick-witted and brilliantly executed. And it was an example of the kind of technical anecdote which now, with Calvert-Lewin increasingly productive in front of goal, is starting to describe a very complete player.

England? Yes, absolutely. Why not?

More broadly, this is what makes Calvert-Lewin not only a bit of a throwback character, but also fascinating. You don’t know what else he’s capable of revealing and it’s that slight air of mystery that places him within a different kind of era.

After all, most players today just re-state their abilities over time. Every weekend, they reaffirm their capacity to perform a specific trait or action. With him, though, it’s almost the opposite. He doesn’t always play with superficial finesse, nor has he ever been a particularly hyped player. Consequently, as people start to pay attention to his performances, they notice little details and causes of effect which, up until then, had remained unseen and unappreciated.

That change is partly to do with Carlo Ancelotti, too. Everton’s performances have improved under the Italian, but he was also very quick to publicly identify Calvert-Lewin as a future international. David Unsworth had said much the same in the past but, with the greatest respect, it’s a different weight of testimony when it comes from a European Cup winner.

That patronage is real, too, and Ancelotti’s focus on Calvert-Lewin is detectable in the way he speaks about his own game. He talks about positioning and data analysis and, as referenced by The Athletic’s Paddy Boyland, that’s the product of video analysis sessions and an extra coaching focus. It’s not just supporter-pleasing rhetoric, because Ancelotti genuinely believes that he’ll be a very fine player.

And one who is evidently quite resilient. Everton have experienced a lot of turmoil over these past few seasons. The players have been jerked between ideologies and passed between different coaches and, during their worst periods, they’ve had to endure constant rumours about sackings and replacements.

That’s another reason why Calvert-Lewin has grown in the dark. It’s also why he’s been slightly disrespected, too, often being depicted as little more than a placeholder in an underperforming side. There are presumably loyalists out there - those who always believed in his ability - but most of the rest of us assumed that – at the very best – he was going to be the kind of forward who needed a partner. Or, a more common criticism, that he would never score in the kind of volume required to be a credible starter.

Unfortunately, once those assumptions exist it can be very difficult to shed them. That’s been part of the problem, too. It can be very difficult to separate a player from his circumstances, or to isolate him from surrounding dysfunction. Added to which, if he isn’t immediately and obviously excellent – and in an orthodox way – then most of us just don’t have the imagination to look beyond those imperfections.

But that makes this unusual and novel and fun. The more of a prospect that Dominic Calvert-Lewin is recognised for being, the more there is to see in his game. Without anybody outside Merseyside really paying attention, he’s become one of the Premier League’s more rounded forwards and, as the competition gears up for its restart, certainly one worth paying attention to.