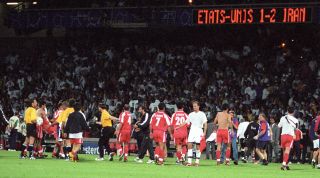 When the draw for the 1998 World Cup pulled together the USA and Iran in Group F, the president of the US Soccer Federation called it "the mother of all games".

At the same time the political regime in Tehran quaked in their boots. Six months later, the match didn't disappoint. Since the Iranian revolution that ousted the pro-American Shah in 1979, relations between the two countries had become hostile. Nineteen years later and a football match between the two nations provided FIFA with a red-hot political potato that would require some very careful juggling.

Iranian-born Mehrdad Masoudi was a FIFA media officer for the match but, given the diplomatic and security issues surrounding the game in Lyon, his responsibilities were far more wide-ranging.

"One of the first problems was that Iran were team B and the USA were team A," explains Masoudi. "According to FIFA regulations team B should walk towards team A for the pre-match handshakes, but Iran's Supreme Leader Khamenei gave express orders that the Iranian team must not walk towards the Americans."

Masoudi eventually negotiated a compromise which saw the Americans walk towards the Iranians, but that was the least of FIFA's worries. Off the pitch a terrorist organisation had bought 7,000 tickets for the game and were planning to stage a protest during the match. Mujahedin Khalq were an Iraq-based group funded by Saddam Hussein whose main aim was to destabilise the Iranian regime. They certainly weren't welcome in Lyon but containing such a large amount of fans amongst the 42,000 crowd wasn't going to be easy.

"From the intelligence we'd received we knew who the main troublemakers would be," says Masoudi. "We issued the TV cameramen with photos so they knew which people and which banners to avoid. The match was being beamed around the world and the last thing we wanted was for this group to sabotage the occasion and use it for their own political purpose.

While many of the protesters successfully smuggled in portions of banners and pieced them together with Velcro, the TV cameras managed to avoid them. But with the group's initial plan foiled, intelligence sources had been tipped off about plan B – a pitch invasion. Cue the French riot police. "They wouldn't enter the stadium unless it was an extreme case," explains Masoudi. This was extreme and to prevent an interruption in the match the extra security entered Stade Gerland.

Not that you would have noticed any of the commotion watching the match on TV. When the two teams came out for the start of the match it was everything FIFA and the Iranian Football Federation could have wished for. "The president of the Iranian Federation wanted to use the match to show his country in the best possible light," says Masoudi. "He asked the kit man to buy a bunch of flowers for every player to take onto the pitch. They were white roses, a symbol of peace in Iran."

The two sides had a joint team photo taken and then the whistle blew for the start of probably the most politically charged match in the history of the World Cup.

The game was everything the Iranians could have hoped for too. In what was a competitive, full-blooded but fair contest, Iran took the lead five minutes before half-time with a goal from Hamid Estili. Mehdi Mahdavikia doubled the lead after 84 minutes and, despite a late goal from Brian McBride, the Iranians held on to record their first ever victory in the World Cup finals – but it might as well have been winning the World Cup itself.

"When Iran qualified for the World Cup after overcoming Australia in Melbourne the whole of Iran celebrated," reveals Masoudi. "People were dancing in the streets of Tehran, openly drinking alcohol and the women took off their head scarves. The Revolutionary Guard didn't do anything about it because they were also so happy. They were football fans first and Revolutionary Guards second. Victory against the USA at France 98 brought back all these emotions and celebrations. The Iranian regime was quite scared by this."

Defeat to Iran condemned the USA to elimination from the World Cup, but despite this the players recognised the part they played in a historic match. "We did more in 90 minutes than the politicians did in 20 years," said US defender Jeff Agoos at the time.

Eighteen months later the two teams played each other again in a friendly in Pasadena, California. "In many respects this match was far more significant because it was a friendly and it needed the co-operation of both sides," says Masoudi. "But it could only have happened if the match at France 98 was a success." It was certainly that. Both on the pitch and off it, this was Iranian football's finest hour.