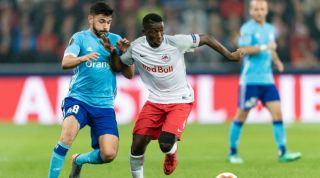 Rolando's extra-time winner meant Salzburg slipped to a 2-1 defeat against Ligue 1 Marseille on Thursday night, and exited the competition after losing 3-2 on aggregate.

However, it looked like it could have been a different story when Haidara broke the deadlock.

In the 53rd minute, the confident young Malian burst past four players before stabbing the ball into the bottom corner just inside the box.

Unfortunately, however, the evening went downhill from there for Haidara.

After Marseille scored the controversial extra-time goal which put them 3-2 ahead on aggregate, Haidara was sent off in the 119th minute after being shown a second yellow by referee Sergey Karasev for an adjudged elbow on Dimitri Payet.

Marseille will now face Atletico Madrid in the Europa League final on Wednesday, May 16.