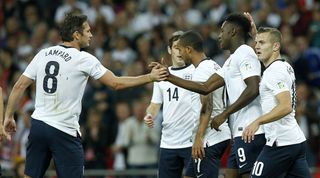 It has been a difficult few months for the Manchester City goalkeeper, and in another era there would almost have certainly been a goalkeeping change – this was traditionally a position where England boasted great strength in depth.

But Hart remains the best option for England, with Celtic’s Fraser Forster the major challenger. It would be highly damaging to Hart’s confidence levels if Hodgson was to drop him for such crucial international games, and he has developed a good understanding with the back four at international level. His worst mistakes have come for Manchester City rather than for England, and in the long-term he should return to the form of old.

By now, many expected we would have a genuine debate at right-back between Glen Johnson and Kyle Walker, who was excellent in his first proper campaign as a regular at Spurs back in 2010/11. But Walker has failed to push on, and his defensive lapses last season were far too common to consider him a superior right-back to Johnson.

Besides, it’s worth remembering that Johnson was one of England’s better performers at Euro 2012, and while he has a tendency to get caught too high up the pitch in international games, particularly at Wembley, his relationship with Theo Walcott is pretty good. Walcott stretches the play, while Johnson can move inside, where he’s capable of unleashing extremely strong shots with his left foot. A decent tackler, Johnson can also beat opponents when scampering down the touchline.

Jagielka wouldn’t have been a first-choice England centre-back at any other time in the past 20 years, but his consistency over the last six seasons at Everton shouldn’t be ignored. Although his positioning seems less assured at international level, he has rarely been guilty of major mistakes.

The key at centre-back is a good partnership, and Jagielka seems to work particularly well with Cahill. “The partnership is getting better, definitely,” he said after the 0-0 in Ukraine. “To play two games together in quick succession makes life easier.” Keeping that combination intact remains the most sensible option.

Although Cahill currently finds himself out of the Chelsea defence, he’s been one of England’s more reliable performers throughout the Hodgson era. Clearly, England are unable to call upon any truly world-class centre-backs at the moment, a distinct change from the days when Rio Ferdinand, John Terry, Sol Campbell and Jamie Carragher were battling it out – but Cahill seems the best bet.

The Blues man is capable of playing both in a high defensive line and in a deep-lying back four – he demonstrated the latter particularly well with a stream of headed clearances during England’s 0-0 draw in Ukraine, although he played poorly in the 3-2 win over Scotland. England have yet to concede a goal with Cahill on the pitch during the qualifiers – although admittedly, the three games have been against weak opposition.

It’s somewhat unfortunate that two of England’s best performers are both left-backs, with no obvious way to use Ashley Cole and Leighton Baines together in the same team.

Baines has been viewed as the natural successor to Cole for a few years, but he’ll be 29 by the time of the World Cup – and might even find that Hodgson considers Kieran Gibbs or Luke Shaw the better long-term bet.

But while Baines has been highly impressive over the last couple of seasons for Everton, it’s worth remembering that his crossing statistics wouldn’t be as impressive for a side not based around that style of football. Baines is perfect for Everton, but Cole is the more complete player.

Indeed, despite winning over 100 caps, it’s difficult to think of a major defensive mistake the Chelsea full-back has made for England. Cole is strong in the tackle when needed – and is also an extremely consistent passer.

Baines has the chance to impress tonight against Montenegro, but until he comes close to the defensive consistency Cole has demonstrated, it’s tough to see why he deserves to start over his Chelsea counterpart on a regular basis.

Michael Carrick remains the most under-utilised England footballer of his generation – despite being a Manchester United regular for seven years, he’s rarely been a first-choice selection for his country. But while there are more spectacular, game-changing midfielders available, few offer Carrick’s calm, measured distribution and intelligent positional play.

He’s particularly suited to international level, when games are generally played at a slower pace. Those are the type of games Carrick thrives in – his major weakness is an inability to play against constant heavy pressure, yet even this idea is exaggerated on the basis of two Champions League final defeats against Barcelona.

Carrick is never likely to be England’s most popular player, but in a way that’s precisely why he needs to start – he allows others to play a more adventurous game. He’s also the Premier League’s most prolific interceptor so far this season.

At his peak, Lampard was a relatively limited player – he excelled at timing his runs to the edge of the box, he was a fine finisher, and he had a great engine. But he was never regarded as a wonderfully gifted playmaker, or someone who could control the tempo of the game.

However, over the past couple of seasons he’s adapted his game well, playing a key role in Chelsea’s counter-attacking on the way to the 2012 European Cup, and playing a more reserved, efficient role in front of the back four. His long, diagonal passes towards the flanks to prompt quick breaks have demonstrated great vision and technical quality, and at Chelsea he’s played a solid, reliable role – winning possession before hitting good forward passes.

A couple of years ago it seemed Jack Wilshere would be England’s key midfielder going into the 2014 World Cup – his impressive knack of receiving the ball under pressure, gliding past an opponent and then playing a positive forward pass was exactly what England needed. But it’s been a difficult couple of years for the Arsenal man, who has struggled with injury and now finds himself on the periphery of Arsene Wenger's side. His form so far this season has been inconsistent, and a rare goal against West Brom covered up his lack of overall impact.

Steven Gerrard once provided the drive and energy offered by Wilshere, but these days he plays a quieter role. Indeed, in the decade-long debate about how he and Lampard could (or rather couldn't) play together, it’s somewhat ironic that they’ve both become more responsible and disciplined at the same time; had either been this player six years ago, the other would have been given the platform to shine.

Although Theo Walcott can be frustrating at times, he offers pace and directness in behind the opposition defence, while his scoring record over the past couple of seasons has been particularly impressive. While he’s yet to grow into an established international player, he remains England’s best goal threat from wide.

Hodgson’s system is unlikely to produce a starting XI that can retain possession consistently, so what England need is players who can attack directly at pace, hitting the opposition defence while they’re disorganised. In Walcott, England have a player perfectly suited to that style of football.

Wayne Rooney remains the closest thing England have to a genuinely world-class player, but surely ‘world-class’ implies great consistency and reliability? There can be few players capable of such extreme peaks and troughs as Rooney, who can dominate a game before looking like a pub player the following week.

There’s also a concern that England depend too much on him at major tournaments, and he’s generally unable to lead his country for the duration. In 2004 he got injured, at 2006 he was unfit, at 2010 he played poorly and seemed unhappy throughout, and in 2012 he started off suspended and ended the tournament failing to perform his defensive duties, leaving England exposed against Andrea Pirlo.

Still, it’s difficult to see how England would be better without him, especially as he can play either as a No.10 or lead the line.

If he could score goals more regularly, Welbeck would be the perfect modern forward – his link-up play is superb, his movement is extremely intelligent, he works extremely hard in the defensive phase of play and he’s versatile enough to play in multiple positions.

And maybe his goalscoring record is improving – he’s hit six goals this season, including three for England, in eight starts. Importantly, his ability to play on the left flank – where Hodgson has often used him – or up front means England could switch between 4-4-2 and 4-3-3 regularly, particularly if Wilshere is one of the midfield trio, and able to move out left when needed.

That’s the major reason why Welbeck should currently be favoured over Daniel Sturridge at the moment – the Liverpool forward is in fine form, but he’s only accustomed to playing a wide role on the right, and therefore won’t be as useful should Walcott remain the first choice on that flank. Besides, his defensive discipline isn’t quite as impressive as that of Welbeck, although he remains a highly useful squad option.