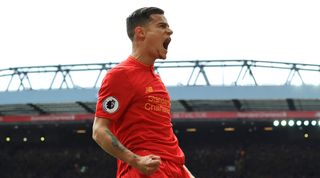 If you'd told a Liverpool fan back in June that Philippe Coutinho would email in a transfer request the day before this season started, they'd have scoffed in your face. The club's golden boy had signed a five-year contract in January, which crucially didn't include a release clause, and unsurprisingly proclaimed his happiness with the whole thing.

"This club is great and the fans have always supported me, so I've been eager to sign this new deal since conversations started. Today is a very happy day," the Brazilian proclaimed, confirming that Jurgen Klopp had sold him his future plans for a Reds revolution.

Half a year on, however, supporters are instead debating whether or not to boo the Brazilian upon his eventual return to action. Liverpool's owners, Fenway Sports Group, stubbornly refused to sell the wantaway No.10 despite three official Barcelona bids - the last of which reached £118m with add-ons.

Against his wishes, Coutinho is still a registered member of Klopp's Liverpool squad.

And, after Brazil's World Cup qualifier with Colombia on Tuesday evening, Coutinho (who has been living “with a very great sadness” according to Neymar) returned to Merseyside to face the music.

Some think Liverpool now have a potentially damaging figure among their ranks. Importantly, however, Klopp does not.

“We still have a really good player in the squad, who can play,” the Liverpool boss told German outlet SPORT1. "We have exactly the situation we wanted and no other.”

He's right: by keeping Coutinho, Liverpool have a world-class player at their disposal who was directly involved in 20 Premier League goals last season. There are plenty of good reasons why Barça wanted to make him the planet's second-most expensive player of all time.

Since the 25-year-old recovered from his ankle problem at the start of 2017, his performance levels rose steadily from consistently good to consistently exceptional. A match-winning performance against Everton in April, which included one of the goals of the season, set the tone for a run of form which catapulted Coutinho to a genuinely elite standard.

No longer can the Brazilian be criticised for going quiet in matches, or for his hopeful potshots from range. His brace against West Ham on the penultimate weekend of 2016/17 was followed by another man-of-the-match display against Middlesbrough, in which he scored yet another magical free-kick.

Coutinho finished last season with 14 goals in all competitions, but his total would have been much closer to 20 had he not missed the whole of December and most of January - which equated to eight Premier League fixtures and multiple cup games - due to a nasty ankle injury sustained at home to Sunderland in November.

The playmaker actually began last campaign in the scintillating fashion in which he ended it - and was the bookmaker's favourite for the PFA Premier League Player of the Year award before injury struck him down.

Now fully fit after a minor back issue, there's no footballing reason why Coutinho can't hit the ground running upon his return from South America - especially considering the manner in which Liverpool have started 2017/18 and the tactics Klopp is using.

Mo Salah has arrived to add speed alongside the electric Sadio Mane, while the criminally underrated Roberto Firmino has helped link arguably the most dangerous frontline in England’s top flight. Last term, Coutinho was a part of this trio, but with Salah on the right and Mane on the left, Klopp will utilise his superstar in a more central, deeper and creative role.

It's from this position that Coutinho destroyed West Ham at the London Stadium, showing his ability to get on the ball, dribble and play the kind of incisive through-balls that few players in Europe are capable of.

Thanks to the pace of Mane and Salah, Coutinho's passing options are maximised this term. Last season, cutting in from the left, he could only really play sideways passes or clip balls into the box. Now at his disposal are onrushing attackers, marauding full-backs and a midfield (comprising two of Jordan Henderson, Emre Can, Gini Wijnaldum or Adam Lallana) to play off.

In short, Liverpool's team is perfectly set up for Coutinho to take his place as its orchestrator. The No.8 role suits his attributes perfectly, and before Barcelona came in he was excelling in his new role over pre-season.

So good has his form been in 2017 that Brazil manager Tite made him Seleção skipper in Neymar's absence. Like Klopp, Tite has also begun to see the benefits of a central, more liberated Coutinho.

Coutinho vs the Kop

There's a caveat to Coutinho's potential success this season, though: the question of whether Liverpool fans will accept him back.

In short, the answer is yes. In the summer of 2013, Luis Suarez handed in a transfer request to force a move to Arsenal. He gave inflammatory interviews in Uruguay, and was already banned for the first five games of that season for biting Branislav Ivanovic at the end of 2012/13.

But as soon he returned, Suarez put in the kind of spellbinding performances which fans simply cannot ignore. The striker achieved the best individual season in Premier League history in 2013/14, scoring 31 goals in 30 starts and winning the Player of the Year gong by an enormous margin.

Rated and slated: the pros and cons of Liverpool’s summer business

Liverpool fans forgave his perceived betrayal because his genius outweighed it. Coutinho has the ability and opportunity to do exactly the same in a far more rounded team than the one Suarez spearheaded four years ago.

If that's not enough motivation, it's a World Cup year - meaning Coutinho has little choice but to continue shining brightly ahead of Russia 2018 if he wants to be assured of his place in the Brazil squad.

Klopp will reintegrate his superstar quickly and the Brazilian's indiscretions will be forgotten as soon as he begins to flourish once more. English fans should enjoy Coutinho's talents while they still can – this season could be career-defining for him.