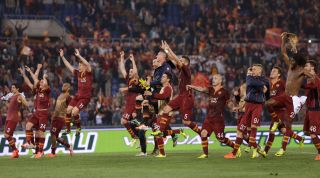 There is an image that sums up Roma's turnaround over the last year, and it came not after their mauling of Milan on Friday evening. Instead it was in the aftermath of their win at Fiorentina the previous weekend, when the players gathered in a circle and performed a mad jig to celebrate qualifying for the group stages of the Champions League.

Goalkeeper Morgan De Sanctis was chief reveler in the middle, but the man who had masterminded the team’s rise from the ashes was nowhere to be seen. Rudi Garcia was striding across the turf at the Artemio Franchi already planning for a home-straight chase of Juventus. Like a Roman general, he was not willing to let standards drop until the war was completely over. It was no wonder that the club’s Player of the Year-elect Mehdi Benatia told Roma Channel that he would follow his coach into battle wherever he ordered.

Roma’s transformation from also-rans to title contenders must be one of the most incredible in Serie A history, and has been built around the understated coaching abilities of someone who had not even been the club’s third choice; Laurent Blanc, Walter Mazzarri and Massimiliano Allegri had been approached, but all backed away. Daniele De Rossi confessed he needed to Google the new man in charge.

That was back in July and the disillusioned midfielder, who had fallen out of favour under Zdenek Zeman, was a step away from joining Manchester United. Ten months later, however, he like the rest of his team-mates, is making history and enjoying the accolades with it.

Friday’s 2-0 win over Milan took Roma to a new club record of 85 points in a season; over the same period no other Giallorossi side has recorded 26 victories, kept 21 clean sheets and conceded just 19 goals (which makes them the meanest defence in Europe). These impressive statistics have been achieved despite Garcia's attacking style, which has liberated his flair players who now know the team has solid foundations.

It is a long way from Catenaccio (The Chain, a tactical system with a strong emphasis on defence). In fact, it's the breaking of the chain and an evolution in the Italian game. Garcia may jot down a 4-3-3 formation before kick-off, but that morphs into a 2-1-4-3 when Roma have possession, which against Milan was over their usual 30-minute average. The team advanced high up the pitch while De Rossi dropped back and the two central defenders – for most of the season Benatia and Leandro Castan, but in the last two matches Rafaeil Tolói – covered the runs of full-backs Douglas Maicon and Dodò.

It means there are often seven players breaking forward to draw the opposition defence out of position. Roma's strategy is all about taking the initiative away from the opponents, but build-up play is never frantic and if the route to goal is blocked then the ball is played back across the halfway line to start the process all over again.

At times it is also used draw the defence further up the pitch, although Milan refused to fall into that trap. Instead they were undone by one moment of brilliance and then exposed by a swift break where Francesco Totti’s shot was parried by Christian Abbiati into Gervinho’s path for a close-range finish.

The real moment of magic was the opening goal, which highlighted why players can be rewarded by staying on their feet. Miralem Pjanic may have nutmegged Adil Rami before breezing past Sulley Muntari and Riccardo Montolivo, but he rode the first two challenges with only one thought in his mind: attack the heart of the defence. His reward was a goal that Garcia hailed as Maradona-esque in its execution, and, like the Argentine legend, Pjanic was all balance, quick-feet and confidence. It was certainly better than Mario Balotelli's solo break which ended up with the Milan striker tumbling to the ground, or worse still when Robinho came on as a late substitute and twice fell over in futile attempts to claim a foul.

Thankfully the referee ignored the theatrics, and instead full attention should be given to the dazzling exploits of Pjanic, Gervinho, Adem Ljajic, Radja Nainggolan and Totti. In the past, the latter was schooled in the Italian art of winning a foul after the slightest of touches, but now the veteran star understands that with such talent around him he does not need to carry Roman hopes alone by any means necessary.

Roma are playing with a pace and style well above any other side in Italy, and it seems they are finding disciples of the new way forward in Fiorentina and Hellas Verona. The latter's 20-year-old forward Juan Iturbe has been linked with a switch to the capital, although Real Madrid are reportedly ready to cover the €15 million Porto are owed from his current loan deal plus another €10m for good measure.

With a return to Europe secured, expectations will be even higher next season, but Garcia knows that without reinforcements he will not be able to eke out the desired quality from the same set of players on two fronts. He has already warned the club’s hierarchy that his ambitions do not end here, and if Roma cannot match them there are plenty of suitors out there willing to woo him away from the Eternal City.

He will want Pjanic to stay of course; the Bosnian's wonder goal will have only added to his value, as will his appearance at the World Cup this summer. At 24 he still has the best years ahead of him, and offering the silky-skilled midfielder a contract worthy of his star billing would not only be an investment as a long-term replacement for Totti, but in the short term would appease Garcia and help entice new recruits.

Roma only have to look at Juventus, where one man stands ahead of Garcia for the coach of the year award: Antonio Conte, who has masterminded the Old Lady back to the top of the Italian game. It took them three seasons to lay the foundations after their return from Serie B in 2006, and four to develop a new stadium. Now they are closing in on a third consecutive title.

But compared to where Roma were this time last year, Garcia has the goods to launch a title challenge in a shorter period.