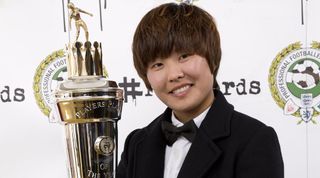 Here, we present a Group E featuring greenhorn Spaniards, a child, and the mercurial Marta...

Strengths: Spain have qualified for the Women’s World Cup for the first time, but did so emphatically by winning nine and drawing one of their 10 qualifying games. Canada may be their first World Cup, but the building blocks have long been in place. Spain won the women’s U17 European Championship in 2010 and 2011, and as such many of these players have grown up together - nine of the squad are 23 or under. Many are drawn from Barcelona and Athletic Bilbao too, so there is a strong sense of familiarity in the squad. Their strength is definitely in their experienced forward line. Arsenal’s Natalia Pablos is the focal point of a 4-2-3-1 formation, and scored 12 of Spain’s 42 goals in qualifying. Pablos is ably backed up by the varied trio of Arsenal club-mate Vicky Losada, who provides the thrusting runs, Erika Vazquez and star player Veronica Boquete (above), who has just won the Champions League with Frankfurt.

Weaknesses: Spain’s inexperience could be their Achilles heel: none of the squad have experienced a World Cup before and they have many players who are tender in years. Much of the experience in their squad is frontloaded towards attacking areas. La Roja only conceded two goals in qualifying, but stiffer examinations await in Canada.

Expectations: Spain are very much an emerging women's football nation, and qualifying for this tournament has been the product of many years of infrastructural endeavour. Having qualified from their group ahead of England at Euro 2013 they will be confident of qualifying for the knockouts, but realistically Canada is about steeling this young group for future tournaments.

Did you know? Goalkeeping coach Manuel Amieiro previously worked with Real Madrid’s youth teams and counts a teenage Iker Casillas amongst his mentees.

Verdict: Quarter-finals. That would represent success and a building block for the future.

Strengths: Like Spain, this will be the Costa Ricans' first appearance at the Women’s World Cup. Recently-appointed coach Amelia Valverde has held positions as assistant manager and coach for the U20s side, and her presence ensures continuity. Creative midfielder Shirley Cruz of PSG is the hub of the team, the sun around which younger talents orbit in an energetic 4-3-3 formation.

The 29-year-old Cruz has won two Champions League titles and six league winners' medals in France, so it’s little wonder that she is the brains of the operation. But the Costa Ricans have plenty of youth on their side too: 18-year-old Melissa Herrera already has 12 goals in 20 games for her country, and coach Valverde has also called up Gloriana Villalobos (above, left), who doesn’t turn 16 until August. With the likes of Cruz and her midfield partner Katherine Alvarado as the team’s technical leaders, there is a nice mix of youth and experience in this team.

Weaknesses: Costa Rica and Spain are kindred spirits, full of youthful exuberance but lacking in tournament know-how. Costa Rica have five teenagers in their ranks and Canada 2015 will test their nerve in what could be a close group.

Expectations: Their principal aim will be group qualification. Given that they're currently ranked 37th in the world by FIFA, that would be a good achievement.

Did you know? Teenager Villalobos made her first-team debut for current club Saprissa when she was just 12.

Verdict: Spain will likely pip them into the knockouts, but the Costa Ricans will have plenty of optimism for the 2019 World Cup in France.

Strengths: Brazil travel to Canada with the 2014 Copa América Femenina title under their belts - their sixth such honour. Brazil have one of the most revered attacks in the women’s game, with 30-year-old striker Cristiane about to participate in her third World Cup, having notched 73 goals for her country. Then there’s Marta (above), possibly the most renowned female footballer of all time. The FC Rosengård forward is a five-time World Player of the Year and won both the Golden Ball and Golden Shoe at the 2007 World Cup in China, where Brazil finished as runners-up.

Marta also happens to be the all–time Women's World Cup goalscorer alongside Birgit Prinz, on 14 goals. Captain Formiga (literally meaning ‘ant’ in Portuguese) is a veteran of 131 caps, including six World Cups and five editions of the Olympic Games. That she describes Dunga as her footballing muse should give you a good idea of the function she performs in this side. Brazil are a side packed with experience, talent and pedigree, and are among the favourites for a reason.

Weaknesses: There aren’t many to choose from tactically, but historically Brazil tend to come up just short when meeting powerhouses like the USA and Germany. Brazil will have designs on winning the tournament, but to do so they'll have to break a glass ceiling against one of the tournament superpowers.

Expectations: Brazil expect to seriously compete to win the tournament. They really ought to qualify from Group E as winners.

Did you know? Though yet to win it, Brazil have never failed to qualify for the Women’s World Cup.

Verdict: A semi-final exit at the hands of Germany, USA or Canada. Basically, a par performance.

Strengths: The strike partnership of Park Eun-sun and Chelsea’s Ji So-yun (above) holds the key for Korea, as they return to the World Cup for the first time since 2003. Park played in that tournament in the United States aged 16, but now 28, she is the focal point of the team’s attack. Currently plying her trade in Russia, Park has learned how to impose herself physically as a lone striker. Chelsea’s Ji - PFA Women’s Footballer of the Year for 2014/15 - floats around behind in the No.10 role, looking to unpick defences with her vision and quick feet.

Korea recently held the US to a 0-0 draw in New York over the weekend with a dogged display, which suggests that they've worked hard on the defensive side of their game coming into this tournament.

Weaknesses: They will be very reliant on Ji and Park if they want to progress from the group. South Korea have experience in holding midfielder Cho So-hyun and goalkeeper Kim Jung-mi, who are central to Korea’s defensive organisation. The aforementioned four carry much of the workload, and will need their team-mates to play above themselves to assist.

Expectations: South Korea have played in a solitary Women’s World Cup back in 2003, losing all three of their games on that occasion. Obtaining their first World Cup victory will be the first priority. However, Spain and Costa Rica are hardly brimming with tournament pedigree, and the Koreans will fancy their chances.

Did you know? South Korea’s first-ever women’s international saw them pitted against Japan in 1990, a game which they lost 13-1.

Verdict: Group E is a three-way tussle for second place behind Brazil, but the Koreans will perhaps fall short and return home before the knockouts.