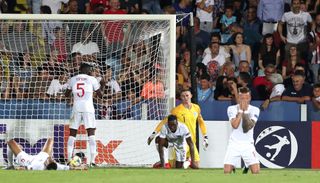 England Under-21s failed to win a game at Euro 2019 and return home on Tuesday having finished third in Group C.

Here, Press Association Sport looks at some of the talking points from the disappointing campaign in Italy and San Marino.

This angle of that @PhilFoden goal… 🙌#younglionspic.twitter.com/iJMARsTCvF— England (@England) June 18, 2019

As if it was not already glaringly obvious, Foden showed he was the real deal in Italy and San Marino, making boss Aidy Boothroyd’s decision to drop him for the 4-2 loss to Romania all the more questionable.

In a must-win game England’s best player did not come off the bench until the 57th minute.

He had already scored a brilliant solo goal to open the scoring in the 2-1 defeat to France and impressed in the 3-3 draw against Croatia.

Boothroyd wanted to protect him from a quick turnaround after a lack of serious minutes for Manchester City but Foden should have been ready to play
two games in three days.

The Young Lions believed the hype

It was an exceptionally talented squad and individually they had some of the best players at the tournament.

As a team, though, they failed to gel and the claims from James Maddison and Dean Henderson that they are a better side than France and Romania – who have both reached the semi-finals – do not hold water.

Boothroyd suggested the assertions were bravado having just been eliminated but there is a strong argument to say confidence boiled over into arrogance.

The squad is a close-knit group and genuinely get along well off the pitch but little went right for them on it.

They will return stronger

Nine of the squad can return for the Euro 2021 qualifying campaign, including Foden, Morgan Gibbs-White, Reiss Nelson and Harvey Barnes.

They will be stronger for the chastening experience after failing to live up to expectations.

It is almost a rite of passage for England players to flop at a tournament but the Young Lions can come back stronger in Hungary and Slovenia.

The Crystal Palace defender’s protracted move to Manchester United clearly affected him. A quiet character, he never recovered from an opening game nightmare.

A poor performance – capped by a calamitous own goal – in the France loss was the only time he was seen in Italy and San Marino.

He was promptly dropped after that and Boothroyd’s veiled swipe at Manchester United showed the boss was unhappy with how his right-back was being distracted.

England forgot how to defend

They conceded just four goals in 10 unbeaten qualifying matches to reach Italy and San Marino but then let in nine in three games.

Seven of those goals came in the final 14 minutes of games as Romania and France struck late to win and Josip Brekalo’s 82nd-minute effort for Croatia denied the Under-21s victory on Monday.

They paid the price for individual errors with Boothroyd – who made his own mistakes – questioning their lack of concentration.