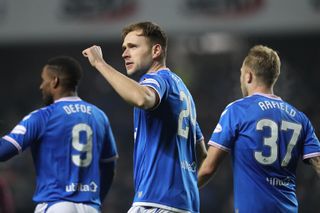 The tightest of margins now separates Celtic and Rangers at the top of the Ladbrokes Premiership, with the top two just one goal apart after both sides recorded big victories on Sunday.

Here, the PA news agency takes a look at what we learned for the latest weekend of top-flight action.

The Canada international has struggled to rediscover his best form this year. His summer exertions in the Gold Cup seem to have taken time to shake off, but against Hearts he looked back to his lively best in a deeper midfield role than he has been used to this term. He played a part in Rangers’ second goal, finished off by Ryan Kent, and seemed to enjoy being in among the heart of the battle as the Jambos were thrashed 5-0.

Christie the king as Celtic drive on

Ryan Christie may have had some luck with his first goal in Celtic’s 4-1 win over Ross County, but he was once again key to an impressive Hoops win. Before he netted the opener from the rebound after his penalty had been parried back out to him by goalkeeper Nathan Baxter, the Scotland international had smacked a post with a free-kick. His second goal, which re-established the Hoops’ lead, was a composed finish as he ran through to slot the ball past Baxter, the champions running out easy winners to keep them just ahead at the top of the Premiership.

“I’m really happy to score but the most important thing is the result.”— Motherwell FC (@MotherwellFC) November 30, 2019

Christy Manzinga took just 14 minutes of his Motherwell career to find the net, rounding off a 4-0 win over St Johnstone with a tidy finish on the counter-attack. The French-born attacker impressed on trial in the summer after leaving a club in Belgium, netting a spectacular overhead kick in a friendly at Gretna, and Motherwell signed him despite spotting a hamstring problem in his medical. Manager Stephen Robinson believes the unpredictable 24-year-old, who played in the same Paris St Germain youth team as former Well defender Cedric Kipre, could be worth the gamble.

Manager Tommy Wright admitted he had to move in the January transfer window to add know-how to his defence, which had an average age of 22. Wright counted seven Motherwell crosses into the box, which yielded three goals and contrasted Motherwell’s determination to win headers in their box with his own team’s.

St Mirren are trying everything to get their first away point

Manager Jim Goodwin surprised Aberdeen by setting up in an attacking formation and his side had their fair share of possession and efforts on goal at Pittodrie. But they suffered an eighth straight defeat on the road when Tony Andreu saw his 83rd-minute penalty and rebound both saved by Joe Lewis to consign the Paisley side to a 2-1 defeat.