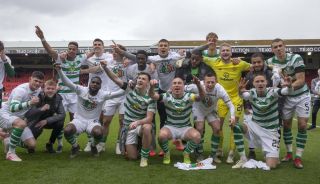 The top and bottom places of the Ladbrokes Premiership were both decided this weekend, with two matches still left to play.

The Hoops clinched their eighth successive title with a 3-0 win at Aberdeen. Much was made of some indifferent results under Brendan Rodgers earlier in the season and the three goalless draws under Neil Lennon, who replaced his fellow Northern Irishman in February. However, without having to reach top gear too often, another championship-winning flag makes its way to Celtic Park and it will take a significant change in fortunes to prevent nine.

2. Neil Lennon has the skin of a rhino

According to the Celtic manager, replacing Rodgers was one of the toughest assignments of his career. “You need the hide of a rhinoceros and big cojones,” he said. “I’m not sure I have got them but I certainly have a rhino hide. You need to bat it away and concentrate. Some of the performances weren’t great but we are unbeaten in 11 games so the standard and expectation is very, very high.”

3. Dundee went down with a whimper

With today’s defeat, relegation to the SPFL Championship has been confirmed #thedeehttps://t.co/JbL2gPdONC— Dundee Football Club (@DundeeFC) May 4, 2019

Jim McIntyre’s men needed a home win over Hamilton to keep their slim survival hopes alive, but struggled to carve out any real chances as they slumped to a 1-0 loss – their 10th consecutive defeat. The relegation dogfight looked set to be a three-way battle two months ago but Dundee have failed to score in seven of their past nine matches.

4. Steven Gerrard is running out of ideas to tackle Rangers’ indiscipline

The Gers boss signalled a change in approach to his squad’s indiscipline after Alfredo Morelos received his fifth red card of the season against Celtic five weeks ago, admitting he could no longer defend the Colombian. But Allan McGregor failed to heed the warnings as he kicked out at Hibernian striker Marc McNulty towards the end of a 1-0 home win at Ibrox. The goalkeeper’s subsequent dismissal was Rangers’ 12th in all competitions this season and Gerrard admitted he was open to advice about how to solve the problem.

5. Kilmarnock are in pole position for Europe

Stephen Findlay’s late winner at Tynecastle saw Killie beat their record points total of last season and move level on 61 points with Aberdeen, with a superior goal difference putting them third. Steve Clarke’s men will guarantee themselves a Europa League place if they stay there and fourth place will be enough if Celtic beat Hearts in the William Hill Scottish Cup final. Hibs are out of the equation following their defeat at Ibrox.