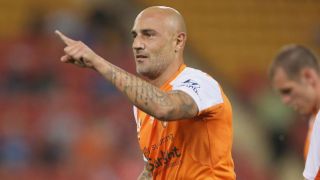 Wellington Phoenix remain winless in the 2017-18 A-League after throwing away a three-goal lead to draw 3-3 with a Massimo Maccarone-inspired Brisbane Roar.

The Roar were facing a fourth defeat from as many league games after former Brisbane man Andrija Kaluderovic's double - either side of Roy Krishna's effort - put the hosts at Westpac Stadium into a dominant lead in the 20th minute.

Brisbane's losing sequence stretched to seven games in all competitions, but Maccarone bundled home on the stroke of half-time to offer hope of a comeback and Avraam Papadopoulos pounced on teenage goalkeeper Keegan Smith's error to further reduce the arrears with his first A-League strike.

Maccarone completed the comeback with eight minutes to go, converting from the penalty spot after Papadopoulos was fouled. Incredibly, Brisbane could have snatched it late on, but Fahid Ben Khalfallah's effort hit the woodwork.

"This is going to kickstart our season," Roar coach John Aloisi said. "It was a brilliant comeback and something that we're going to build on. We dominated in the second half and were unlucky not to win in the end."

Ross McCormack was at the double in the late game to maintain Melbourne City's perfect start to the season, Adelaide United falling to a 2-0 defeat at Allianz Stadium.

McCormack opened the scoring from the penalty spot in just the 11th minute after Adelaide goalkeeper Paul Izzo clattered Stefan Mauk and the Scotland international scored again soon after, bending a fine 25-yard free-kick out of the keeper's reach.

Osama Malik was dismissed for a swinging elbow in the second half, but Melbourne hung on to condemn Adelaide to a first league defeat of the season.