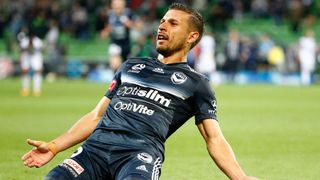 Kosta Barbarouses' last-gasp strike secured a dramatic 3-2 win for Melbourne Victory over Perth Glory in the A-League on Saturday.

Victory suffered a 2-1 loss to Wellington Phoenix last time out and had to come from behind to see off a Perth side who had suffered defeats in their last three games without scoring.

Scott Neville netted the opener in the second minute, heading home at a rain-soaked AAMI Park.

The hosts equalised before the break when James Troisi rammed home a loose ball, with Mark Milligan putting them ahead after turning in a free-kick delivery early in the second half.

But Glory refused to surrender and looked to have earned a share of the spoils when Diego Castro brilliantly lobbed goalkeeper Matt Acton seven minutes from time.

However, Barbarouses had the final say as he coolly finished past Liam Reddy in the 90th minute to lift Kevin Muscat's men up to fourth.