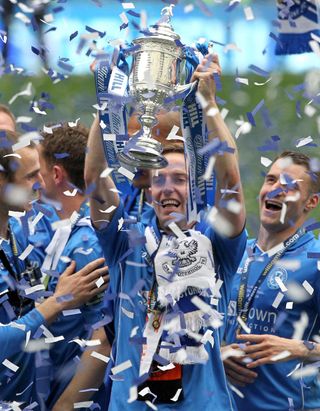 Steven MacLean is determined to saviour what could be his final cup final – but admits it will only be worth remembering if Hearts win.

The 36-year-old knows what it is like to taste trophy success, having scored St Johnstone’s 2014 winner against Dundee United as they lifted the William Hill Scottish Cup.

The former Rangers youngster also has a winners’ medal from being an unused substitute during the Ibrox club’s 2003 victory over Dundee.

Thankfully for MacLean, he has yet to end up on the losing side at a showpiece occasion and he does not fancy starting now.

The Jambos’ take on Celtic in the final of this year’s competition on May 25 and, while few are giving McLean’s side much hope of halting the Hoops’ treble treble bid, MacLean is refusing to contemplate coming out second best at Hampden.

“A lot of people tell you to saviour these occasions, but I think you only do that if you win,” he said. “A runners-up medal is no good to me. It’s no good to anybody.

“You can only enjoy these days by winning. Even when you do win, it passes you by so quickly. You find yourself sitting in the dressing room afterwards thinking, ‘Booof. What just happened there?’

“It’s OK saying, ‘Let’s go have a good day, get our suits on, do whatever and look good’. But we’re going there to win the game.

“I will be quite happy that no-one is giving us a chance.

“We will go about our business quietly and hopefully we can cause an upset.

“Celtic will be favourites but we won’t be daunted by it. We want to enjoy the day but we have to take part and make sure we make a game of it.

“We’ll certainly be going there looking to make a game of it. There will be 14 boys who get on the pitch and if they aren’t confident then they shouldn’t be there.”

Hearts have Friday night’s trip to Pittodrie then a cup final dress rehearsal at Celtic Park to contend with before turning their attentions to events at the national stadium.

The aim for Craig Levein’s men is to start building momentum with a win firstly against Derek McInnes’ Aberdeen, having failed to win 10 of their last 14 games.

But MacLean will not get himself into a panic if his team suffer more disappointment as they wind down their Ladbrokes Premiership campaign.

He said: “We’ll be looking to get some momentum built up before Saturday.

“We’ve got a big game against Aberdeen on Friday night then Celtic in the league and it’s important we try to put in a couple of big performances before looking forward to the cup final.

“But I don’t think these two games will have any bearing on what happens at Hampden.

“We all want to go in with some positivity, but what happens over the next two games will have no bearing on the cup final.

“Obviously ideally we’d like to go in on the back of two wins but whatever happens it will be a different game in the final.”