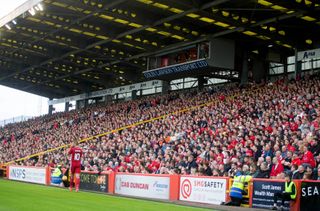 Aberdeen claim they could have 7,500 supporters inside Pittodrie early in the season.

The Scottish government’s national clinical director, Jason Leitch, claimed this week there was “pretty much no chance” of fans in August with his expectation being it would be October before physically-distanced crowds are allowed, apart from very few small-scale test events.

However, Aberdeen – who had sold 6,700 season tickets when they made their statement – are making contingency plans for some leeway, with their sums relying on physical-distancing reducing from two metres to one. Pittodrie’s capacity is just under 21,000.

First Minister Nicola Sturgeon subsequently announced some sectors could move to the latter, possibly by the end of next week, if they implement mitigations. The hospitality, retail and public transport sectors will initially be allowed to move to the lower figure.

The club is increasingly hopeful a partial crowd of 7,500 supporters may be allowed when football returns.— Aberdeen FC (@AberdeenFC) July 1, 2020

An Aberdeen statement read: “As we emerge from lockdown and restrictions are easing, the situation with regards to football is changing on an almost daily basis.

“With positive progress on the fight against Covid‐19, there may now only be a few home games behind closed doors, and we could get back to playing in front of partial crowds earlier than anticipated.

“AFC will, of course, be guided by government advice and the guidelines from the footballing authorities.

“With the opening league game only four weeks away, we are now making preparations for matches at Pittodrie both behind closed doors and with a reduced capacity, initially allowing access for 7,500 season ticket holders, assuming one-metre social distancing.

“The first 7,500 season ticket sales for the 20-21 season will be given priority for limited access games.

“With 6,700 season tickets already sold, there are only 800 remaining to make sure you can attend games with partial crowds.”

The timing of the return of fans will be crucial to clubs’ financial situations.

And Livingston manager Gary Holt believes it will also have a crucial impact on the standard of football.

📋| Despite the season starting behind closed doors, we’re sure you’re all still excited for fixture release date – and this has now been confirmed by the @spfl as being this coming Monday, 6th July.— Livingston FC (@LiviFCOfficial) July 1, 2020

“We all want fans in the ground, not just for the income, but the atmosphere, the rivalry, everything that goes with it,” Holt said.

“We have all been watching the games on the telly and I have yet to see one that has totally stood out and I have been astounded or enthralled by the game.

“You need that atmosphere and desire, that feeling when you don’t win the game, how it hurts your supporters, but also when you win the euphoria that goes with it. It adds that little bit of spice to our game.”