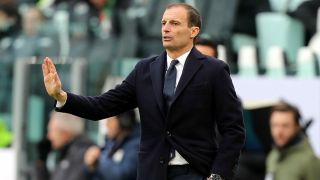 Juventus boss Massimiliano Allegri insists he is not obsessed with winning the Champions League and does not want his side to lose focus on Serie A ahead of Sunday's derby with Torino.

Juve surrendered a two-goal lead against Tottenham in the first leg of their last-16 tie on Tuesday to draw 2-2, leaving them facing a difficult task to progress to the quarter-finals ahead of the return tie at Wembley.

The result was greeted with frustration by fans at the Allianz Stadium, who have seen their side lose the final twice in the last three years, most recently to Real Madrid last May.

Allegri, however, says success in Serie A and the Coppa Italia remains just as important to him and feels a failure to defeat Spurs should not be considered a disaster.

"The Champions League mustn't be experienced like an obsession because, when you have an obsession, you never win!" he told a news conference.

"Everyone around Juventus ought to be very proud, because we have become stable among Europe's top 10 clubs.

"The important thing now is to focus on Serie A and the Coppa Italia semi-final, because there's a long way to go before March 6 and Wembley.

"We have the same chance of progressing as we did before the first leg. We got a lot wrong in that game. Our pass completion rate was around 55 per cent and it's usually at 70 per cent.

"Having said that, Tottenham have been among the most prolific sides in the Premier League for years, with a strong defence and the division's top scorer. They are not an easy team to face."

Juve will welcome back Paulo Dybala for the derby on Sunday, although Allegri says the Argentina international has not recovered enough from a hamstring injury to start the match.

Mario Mandzukic will also miss out through illness, while Federico Bernardeschi faces a late fitness test and Gianluigi Buffon will be rested.

"Mandzukic has a fever, so I sent him home," said Allegri. "Bernardeschi had a muscular problem in training yesterday. He's available to us but he'll need to be assessed.

"Dybala's condition is good but not good enough for him to start. He can probably play about 30 minutes. From next week, Blaise Matuidi will be available, too.

"As planned, Buffon will rest and return against Atalanta in the Coppa Italia semi-final. Wojciech Szczesny will start."