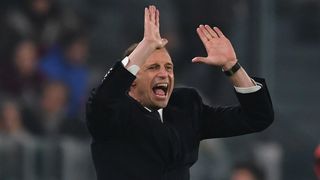 Juventus coach Massimiliano Allegri wants his players to reap the rewards of an impressive campaign when they kick off a "20-day mini-season" against Lazio in the final of the Coppa Italia.

Juve hoped to have the first part of a targeted treble in their possession at the weekend but a 3-1 defeat to Lazio's city rivals Roma means they are still one win away from a sixth consecutive Serie A title.

That is expected to arrive at home to Crotone this Sunday but first Allegri's men will return to the Stadio Olimpico to take on Simone Inzaghi's side in Wednesday's showpiece clash.

There is also the small matter of the Champions League final against Real Madrid in Cardiff on June 3 on the horizon and the Juve boss is primed for such big occasions.

"A 20-day mini-season kicks off with the Coppa Italia final then our home match against Crotone and it ends in Cardiff with the Champions League final," Allegri told a pre-match news conference.

"It's time to step up and start reaping what we have sown. Lazio have had a brilliant calendar year and I have no doubt that their coach Inzaghi will go on to do great things as a manager.

"They have an excellent squad and we will need to play very well indeed to beat them."

Juventus led through Mario Lemina against Roma before goals from Daniele De Rossi, Stephan El Shaarawy and Radja Nainggolan condemned them to a first Serie A defeat since January.

Nevertheless, Allegri was satisfied with the efforts of a line-up featuring six changes from the Champions League semi-final triumph over Monaco.

"I thought tactically we were very good against Roma in the first half but we lacked the required cutting edge to shut the door on them early on," he said.

"The small details cost us. We conceded from a set-piece and then left ourselves too open after our own offensive free-kick. How you manage those moments will always be the difference between winning and losing.

"What matters now is how we recover. What I can guarantee is that you won't see the same performance again tomorrow night. Whoever takes to the field will play with absolute focus."

Allegri is waiting on the fitness of forward duo Paulo Dybala and Mario Mandzukic, who are nursing respective muscular and back problems.