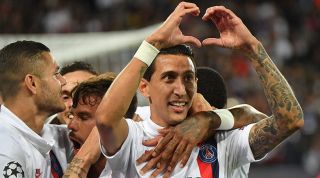 Di Maria is enjoying a good season for Paris Saint-Germain, scoring eight goals and assisting 14 in Ligue 1 so far.

One of his most notable contributions came against his former club Real Madrid in the Champions League group stage opener.

The 32-year-old scored the second and assisted the third in PSG's 3-0 win over Madrid.

Although there was no love lost for Los Blancos, Di Maria is reported to have a real disdain for Manchester United.

The Argentine attacker spent one season in Manchester during the 2014/15 campaign.

His time there was marred by rumours that he and his girlfriend were unhappy in the northwestern city.

The young goalkeeper told a Polish Youtube channel that Di Maria can't stand the sight of the Red Devils.

"He has no good memory of the time he spent there. In fact, when something related to Manchester United appears on television, it changes soon."

Van Gaal told The Guardian that "Di María had a problem with the English football culture and the climate."