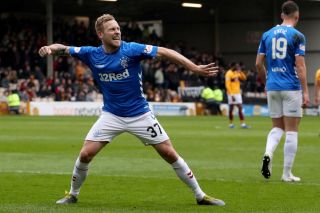 Rangers ace Scott Arfield insists he is settled at Ibrox as shrugged off interest from Crystal Palace.

The London outfit have been linked with a £3million summer swoop for the in-form Gers midfielder.

The former Falkirk, Huddersfield and Burnley midfielder has rediscovered his best form since returning to Scotland to link up with Steven Gerrard last year.

His displays over the past few weeks have seen him named as the Ladbrokes Premiership player of the month for April and, as well attracting interest from Palace boss Roy Hodgson, Southampton are also reportedly keeping tabs on the 30-year-old.

But Arfield says he is loving the new lease of life he has been given at Rangers following a frustrating end to his stint at Turf Moor.

Speaking to the media ahead of Sunday’s clash with Hibernian, the Canada international said: “Over the last two years I’ve not played enough football.

“I had a year-and-a-half at Burnley where I was in and out of the team, so this is the happiest I’ve been in years, being at this football club, wearing this badge and walking around here and being back in Glasgow.

“My family is settled and I’m fully focused on doing the right things for Rangers and to win games.

“You know more about (Palace’s interest) than me.”