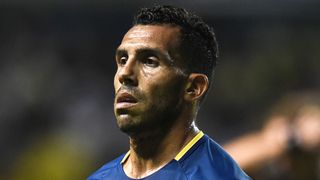 Jorge Sampaoli would be open to handing Carlos Tevez an Argentina recall ahead of the World Cup.

Tevez played the full 90 minutes of Boca Juniors' 2-0 win over Colon on Sunday, his first Superliga appearance since returning from a season with Shanghai Shenhua in the Chinese Super League.

The 33-year-old has reiterated his desire to compete with the likes of Lionel Messi, Gonzalo Higuain, Sergio Aguero and Mauro Icardi for a place on the flight to Russia, and Sampaoli is not ruling him out.

"There is a group of people who work to know the current status of some players who are not on our list in case one stands out. If Tevez stands out, he will be analysed," Sampaoli told reporters.

"No one is unaware of Tevez's attributes. When I was a coach I wanted to take him to Sevilla for the Champions League. Any player that excelled will be watched closely."

Sampaoli's comments came after Tevez, who last featured for Argentina in October 2015, vowed to convince the coach of his worth.

"I'm not giving up the fight for the World Cup," Tevez told La Red radio.

"I'm not going to make it easy for Sampaoli. If Sampaoli has doubts, it would be nice to break them in the next four months."

Boca are six points clear at the top of the Superliga and will take on River Plate in the Super Copa in March.