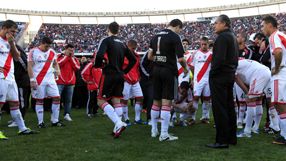 Angry fans wrought mayhem in and around River's Monumental stadium after their team lost their play-off to Belgrano of the second-tier Primera B Nacional.

Streets in the Nunez neighbourhood were littered with debris from looted shops while fires raged in the middle of the main four lane Avenida Libertador.

The Argentine Football Association (AFA) said on Wednesday it would scrap the play-offs from the 2012/13 season but would retain two championships, the Apertura from August to December and Clausura from February to June.

"The [short] championships are more interesting and we have proof of that with the way they are played," Luis Segura, an AFA board member and president of Argentinos Juniors told reporters.

The complicated relegation procedure involves a separate table of points averages over three seasons, which can produce anomalies such as Tigre currently contending for the Clausura title while also seeking points to improve their poor average.

If Tigre are relegated in June it will not be due to their results this season but in 2009/10 when they picked up 32 points in the 38 matches they played over the two championships.

River's case was similar and they paid for a poor 2008/09 season which included bottom place in the Apertura.

Club directors justified their decision not to revert to a single championship, as sought by AFA chief Julio Grondona, saying teams had more chances of being crowned champions.

Five different teams have won the last five championships. Boca Juniors were the last team to win both championships in the same season in 2005/06.