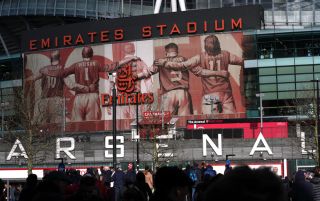 Arsenal fans have been left “heartbroken” at not being able to travel to Baku to watch their team play Chelsea in the Europa League final, according to managing director Vinai Venkatesham.

Since the two London clubs qualified, concerns have been raised over the showpiece event being hosted in Azerbaijan’s capital on May 29.

Both Arsenal and Chelsea expressed disappointment at an allocation of around 6,000 tickets each for the Olympic Stadium, which can hold a capacity of some 69,870.

Travel has also proved an issue for those planning to make the round trip of 5,000 miles from London to see their team bid to lift the trophy.

UEFA competitions director Giorgio Marchetti has written a letter to Arsenal regarding the issues raised by the club.

Venkatesham accepted the decision by UEFA had been taken well before the finalists were known but revealed supporters had been in touch to express their own frustrations.

“I would say that, from a club perspective, we are really disappointed that we have ended up in a situation where we are playing in a major European final and, because of travel issues, the maximum number of tickets that can be made available to fans of both clubs is 6,000,” Venkatesham told Arsenal Media.

“So we are going to be playing in a stadium that is bigger than Emirates Stadium and both clubs are only going to get 6,000 tickets. It’s hugely disappointing.”

Venkatesham added: “We have been receiving calls and letters and much more from fans who are heartbroken because they are not able to go to the final, despite following Arsenal home and away for so many years.”

Arsenal continue to work with the Foreign Office after it emerged season-ticket holders with dual British and Armenian citizenship had been denied visas to visit Baku because of tensions with neighbouring Azerbaijan.

However, Azerbaijan’s ambassador to the UK, Tahir Taghizadeh, maintains there is no cause for concern ahead of the final.

Taghizadeh told Sky Sports: “I would say (to Mkhitaryan) ‘you are a pro athlete, you are a footballer, and a class A footballer’, so let’s make sure this is a class A event if our purpose is to make a great final.

“If our purpose is to play political games around it, that is something different, but I hope it is not, because you (Mkhitaryan) are being paid as a footballer, not as a politician, so let’s leave other issues aside.”

▪️ The changes over the past 12 months▪️ @UnaiEmery_’s performance as head coach▪️ The #UEL final and the ticket allocation▪️ Our owners' ambitions for the club— Arsenal FC (@Arsenal) May 20, 2019

Emery’s squad are currently preparing for the Europa League final, but plans are already in place ahead of the next campaign.

The Premier League club announced on Monday that Arsenal Women will play Bayern Munich Women in the pre-season Emirates Cup before Emery’s side take on Lyon in a revamped version of the tournament.

Arsenal will also meet Major League Soccer side the Colorado Rapids in Denver before then taking part in the International Champions Cup, with fixtures against Bayern, Roma and Real Madrid across three cities in the United States of America.

As part of a wide-ranging interview with the in-house club media, Venkatesham maintained Arsenal’s US-based owners were “hugely ambitious” and would continue to support strengthening the squad where possible.

“Going back to the earlier question around ownership, all of these initiatives and ideas about how we move the club forward are completely supported by Stan and Josh (Kroenke),” Venkatesham said.

“Their direction is quite simple: every single penny that we generate as a football club is available for us to invest against achieving that ambition, and that is the maximum that we can ask from our owners because that is the maximum allowed through the financial fair play rule.”