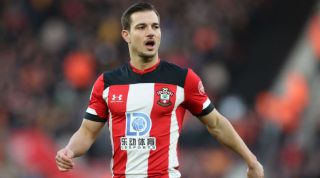 It's no secret that Arsenal are on the hunt for defenders this January, and have been linked with a number of names.

The latest is from within the Premier League and may only happen if their rivals Tottenham agree to let a player leave.

According to The Telegraph, Arsenal are considering a move for Southampton's Cedric Soares.

The versatile full-back would serve a purpose making up numbers in an injury-stricken Arsenal backline.

The Gunners' leaky defence has conceded 34 goals in 24 Premier League games this season, and new boss Mikel Arteta is keen to improve that record.

Despite injuries to Kieran Tierney and Sead Kolasinac, youngster Bukayo Saka has stepped up to the mark of late and provided Arteta with another alternative.

Hector Bellerin is also returning on the right side of the defence, but Cedric would offer Arsenal an insurance policy should he receive another setback.

If Arsenal continue to fight on three fronts in the Premier League, Europa League and FA Cup, then squad depth is essential.

Cedric can play on the right or left side, which could prove handy if Arteta encounters more selection dilemmas.

It's reported that the 28-year-old would be available for as little as £6m as his contract runs out in under six months time.

However, the Portuguese defender's exit from St Mary's is dependent on the Saints securing the services of Spurs right-back Kyle Walker-Peters.

The young Englishman has fallen out of favour with Jose Mourinho and it's expected that the club will indeed allow him to leave.

It's understood the deal would be an initial loan, perhaps including an option to buy.

5 things you should know about Tottenham target Steven Bergwijn