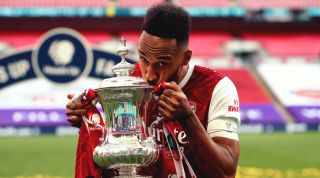 A slew of big Arsenal transfers could see a huge overhaul of the Gunners' team this summer, if the rumour mill is to be believed.

The move for Willian, 31, is reported in the Guardian today and appears to be the most advanced of all the potential moves. The forward has apparently rejected a two-year extension at Stamford Bridge, allowing him to leave on a free, and Arsenal are ready to offer him a three-year deal.

EVERY CLUB, EVERY SEASON All-time Premier League table: after 28 seasons, where YOUR club sits

BERGKAMP EXCLUSIVE The Iceman talks to FFT on making Arsenal history, 25 years after signing for the Gunners

He's unlikely to make the decision until after Chelsea's Champions League second-leag game against Bayern Munich at the weekend, which the Blues go into 3-0 down on aggregate. His game time under Frank Lampard looks set to diminish, with Chelsea signing Timo Werner, Hakim Ziyech and hoping to add Kai Kavertz this summer. The only obstacle to a move to north London is the suggestion by Willian's agent Kia Joorabchian that five clubs are interested in his player's signature: two in the Premier League, two in Europe and one in the MLS.

Arsenal's interest in Atletico midfielder Thomas Partey is longstanding, with The Times reiterating Arteta's hope to land the 27-year-old Ghanaian today, as well as his targeting of Philippe Coutinho – and belief that Pierre-Emerick Aubameyang will extend his £250,000 contract. This might come as some surprise, given the forward's reticence to talk on the subject after scoring two goals in Saturday's FA Cup final win.

There is a suggestion from French outlet Le10 Sport that the Gabonese forward could be swayed by Arsenal's transfer activity – with a particular desire to see the Gunners move for Barça's Ousmane Dembele.

Dembele, 23, is not thought to be keen on a move away from the Camp Nou, but the Catalan side are hoping to lighten their wage bill to secure Leo Messi's future – as well as a hope to sign Inter Milan's Lautaro Martinez.

This transfer appears a little more far-fetched than the others, and would indicate a massive summer of spending at the Emirates. Chalk this one up as unlikely.