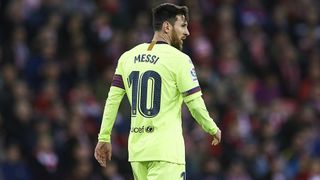 Lionel Messi's return to the starting line-up was not enough to prevent Barcelona drawing a third successive match across all competitions, as Athletic Bilbao held out for a 0-0 stalemate at San Mames in LaLiga.

Argentina superstar Messi was only named among the substitutes for Wednesday's 1-1 Copa del Rey draw against Real Madrid having struggled with a thigh injury and he looked a little off colour as Barca end the weekend just six points clear of Los Blancos in second.

Athletic edged an entertaining first half and went close on a couple of occasions, while Barca appeared to be missing the talents of Arthur in midfield – Arturo Vidal failing to impress in a similar role to the injured Brazilian, who faces a month out.

Ernesto Valverde's side had little luck creating clear-cut opportunities in the second half - albeit Nelson Semedo was contentiously denied a last-gasp penalty – and could have even have lost as Athletic, who had Oscar De Marcos sent off for a second bookable offence in injury-time, went close twice late on.

Barca struggled to cope during the early exchanges and had two lucky escapes. Yuri Berchiche drilled just wide of the bottom-right corner before Markel Susaeta's curling effort forced Marc-Andre ter Stegen into a wonderful acrobatic save.

The visitors gradually gained a foothold and went mightily close in the 26th minute, as Iago Herrerin beat Semedo – who was incorrectly pulled back for being offside at the end of the move – and nudged the ball to Messi, whose first-time effort from distance hit the crossbar.

Barca were convinced they should have had a penalty at the start of the second half when Luis Suarez's header appeared to strike the arm of Inigo Martinez, but nothing was given.

Athletic nearly took all of the points in the final 10 minutes, Inaki Williams heading wide from close range, before then seeing Ter Stegen produce a remarkable reaction save to thwart him from just 10 yards.

De Marcos was given his marching orders late on when handling the ball, and Barca were denied a penalty with the last action of the game – VAR failing to reward them despite Semedo appearing to be caught by Yeray Alvarez.

What does it mean? Barca blip coming at the wrong time

As Santiago Solari's Madrid – 3-1 victors over Atletico Madrid on Saturday – pick up the pace in LaLiga, cracks are starting to appear at Camp Nou. This may just be a brief blip, but Valverde needs his men to react quickly.

Alvarez in command at the back

Athletic had to contend with long periods under pressure in the second half, but Alvarez remained solid in defence, marshalling Luis Suarez particularly well. He was perhaps lucky to avoid conceding a late penalty for his tackle on Semedo, however.

Coutinho blends into the background

Even though he did not look entirely sharp, Messi was still seemingly expected to do all of the creating for Barca. Philippe Coutinho should be the one to take some of the burden off their talisman, but he offered very little spark, yet again.