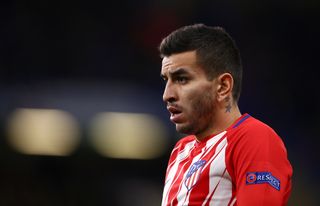 Atletico Madrid have confirmed that Angel Correa and Sime Vrsaljko are the two players to have tested positive for coronavirus.

The club announced the cases on Sunday, stating that the then-unnamed individuals are self-isolating at their respective homes and will not travel to Portugal for the revised conclusion of the Champions League.

In an update, Atleti confirmed the rest of the squad has been cleared to travel for the quarter-final tie against RB Leipzig which is due to take place in Lisbon on Thursday.

“First team players and coaching staff underwent new PCR tests on Sunday and all results have come back negative,” said a statement on the club website.

“After two first team members tested positive on Saturday and following the health protocol, further exams were carried out on their relatives, all of which were negative.

“The club’s medical services have been given permission to reveal their identities, thus putting an end to the speculation.

“The first team will return to training on Monday evening without Angel Correa, who is asymptomatic and self-isolating at home, and Sime Vrsaljko, who was recovering from an injury and not training with the group.

“The Croat is also asymptomatic and will remain at home by decision of the medical services, although his case is considered to be resolved by the health authorities, having generated antibodies (IgG) several months ago. The doctors will monitor both players as per the health protocol.”

In the absence of Correa and Vrsaljko, Atleti added that academy players Alex Dos Santos, Manu Sanchez, Riquelme and Toni Moya will be added to squad alongside the 21 first team players travelling to Portugal.