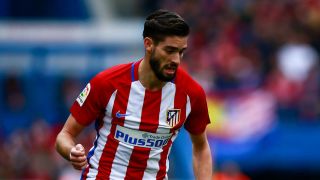 Yannick Carrasco is a surprise inclusion in the Atletico Madrid squad for the first leg of the Champions League semi-final against local rivals Real Madrid.

The Belgian winger suffered a collarbone injury in Atletico's 1-0 defeat to Villarreal on April 25 and he had not been expected to return in time for the trip to the Santiago Bernabeu on Tuesday.

But the 23-year-old was passed fit, providing a boost for Diego Simeone, who is without injured defenders Jose Gimenez, Sime Vrsaljko and Juanfran.

There were no surprises in Real Madrid's squad announcement, with Raphael Varane available to return in defence after a period on the sidelines with a hamstring injury.

Atleti midfielder Gabi said his side have to play a "perfect" match to be able to beat Madrid, who triumphed against their local rivals in the 2014 and 2016 finals.

"We have to control our emotions very well and play the perfect match to try to beat Real Madrid," Gabi told a pre-match press conference on Monday.

"In fixtures as evenly-matched as this one, any detail, any success against the opposite goal, are the ones that set the result."