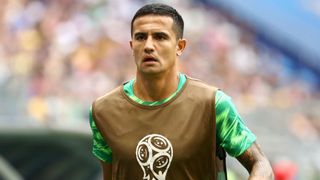 Australia's hopes at Russia 2018 were left looking slim after Thursday's 1-1 draw against Denmark, with Tim Cahill left on the bench once more despite further evidence of a lack of cutting edge.

Speaking to some of Australia's fans and ex-players in the build-up to the clash, the common criticism levelled at the team was its inability to break sides down and create chances.

Former winger Stan Lazaridis, part of the 2006 squad that reached the second round, had called for Cahill to start and summed up the failings of the current vintage.

FT 1-1 Socceroos by far the better side in the second half but a lack of quality in the final third lets them downJune 21, 2018

"We've just got to score a goal, that's our problem at the moment," he told Omnisport.

"The guys have been playing well, it's hard, we had an era there with the [Mark] Vidukas and these sort of players playing in the Premier League week in, week out so it was a high calibre of player.

"We probably don't have that high calibre of players [now] but saying that we've still got some very good individuals...our problem has been scoring goals and even through qualifying it was an issue.

And so it proved here at Samara Arena, as Christian Eriksen's superb early finish underlined the disparity in quality between the functional, physical Aussies and the one world-class talent on the pitch.

To their credit, the Socceroos bounced back strongly from that early setback and, on balance, deserved their equaliser through Mile Jedinak's penalty - even if it was fortuitous in its circumstances as the VAR system once again played a pivotal role.

In the second period, Australia were by far the better side but all too often they were profligate from promising positions as key passes went astray.

During the pre-match media conference, suggestions to Van Marwijk that Cahill - the country's record goalscorer featuring at his fourth World Cup - could start were dismissed with a succinct "everybody has a chance".

But the veteran Dutchman kept faith with the side that performed admirably against France; Andrew Nabbout, Tom Rogic, Robbie Kruse and Mathew Leckie comprising a forward line full of bustle and industry but with just 21 international goals between them.

Cahill, who has 50, was left on the bench in the opener and Australia found themselves in a similar situation here at 1-1 with time ticking down, unsure whether to stick or twist.

As in Kazan, Van Marwijk threw on 19-year-old Daniel Arzani - the youngest player at the finals - and when Nabbout went off with a shoulder injury, Tomi Juric was summoned from the bench.

Australian fans close to the media seats had begun to call for Cahill but when Jackson Irvine replaced Rogic they were forced to accept their wishes would be denied, leaving them with a lot to do to reach the last 16.