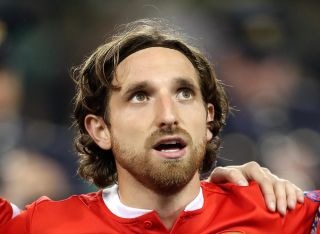 Joe Allen believes history could repeat itself as Wales seek to make the most of a lucky break in Euro 2020 qualification.

There were strong parallels between Gareth Bale’s header against Azerbaijan on Friday and the Real Madrid forward’s free-kick in Andorra five years ago.

Both of Bale’s winners came during the final 10 minutes and spared Wales huge embarrassment against two of the whipping boys of international football.

It remains to be seen whether Bale’s close-ranger header in the 2-1 home win over Azerbaijan – which came after a bizarre own goal had gifted Wales a half-time lead – has the same importance as that strike in Andorra.

His twice-taken free-kick set Wales on the road to the 2016 European Championship – their first major tournament in 58 years – and they would eventually reach the semi-finals in France.

Asked whether the Azerbaijan win had reminded him of the Andorra game, Allen said: “It did. That’s the feeling I’ve got.

“Maybe it’s the swing in terms of momentum, and that little bit of luck as well.

“Hopefully it’s a good sign of what’s to come.”

Wales trail group leaders Croatia and Hungary by three points at the halfway stage of qualifying, and are level with Slovakia in the race for a top-two spot.

Ryan Giggs’ side are in friendly action against Belarus in Cardiff on Monday, but will be paying close attention to the qualifiers between Azerbaijan and Croatia and Hungary and Slovakia.

“Who knows what we will need (to qualify),” Allen said after Wales had bounced back from June defeats in Croatia and Hungary.

“The summer was a big blow to our chances, we have never had that doubt that we can still qualify as long as we up things and improve.

“It wasn’t free-flowing football or a comfortable win, but we got the three points and that’s the main thing.

“This good result will help us going to Slovakia, and we are trying to focus on doing our job right.

“If we can win our home games and go on the road and get the results we need, then that will be enough.”

Some Wales fans took to social media to vent their frustration at Giggs, who was appointed in January 2018 and has had a mixed 20 months in charge.

Despite having an array of attacking talent at his disposal, and Bale seemingly back to his best after returning to favour at Real, Giggs has yet to fit those exciting forwards into a cohesive team structure.

“The lads haven’t performed to their best but they have delivered for him,” Allen said.

“You need reminders in different ways and we were certainly given that.

“Hopefully this can be that little bit of momentum we can take forward now.”