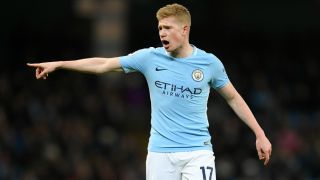 City ran out comfortable 3-0 winners, but much of the attention after the match was on West Brom's tackling.

Substitute Brahim Diaz was on the end of a strong Matt Phillips challenge five minutes from time which left Pep Guardiola angry.

Phillips only received a booking for his tackle, the same punishment dished out to McClean 22 minutes from time, when he made a callous attempt to bring De Bruyne down on the break with a studs-first lunge, but luckily for the Belgian, the contact was minimal.

De Bruyne was not aware quite how ugly McClean's challenge was until seeing a replay after the game and he was not particularly impressed with the winger's conduct.

"I didn't know the tackle was like that," De Bruyne told reporters. "I've just seen it [McClean's attempted tackle]. Let's just say the ball wasn't in the neighbourhood.

"The referee told me he didn't touch me good enough to get the red card, but obviously I told him I saw the guy, I was jumping. I don't know what they [players making overly-aggressive tackles] are thinking - you can also pull a shirt - that's more effective than a tackle.

"Sometimes it gets frustrating for us. A lot of teams are making a lot of fouls against us. We make a foul, we get a yellow card, I don't know how it's possible sometimes. I know sometimes there are tactical fouls, but it's just the way it is."

There was plenty to be positive about after the game, however, with debutant Aymeric Laporte's performance chief among them.

The French centre-back was making his first appearance since joining from Athletic Bilbao for €65million and he fitted in seamlessly, impressing De Bruyne.

"He was very good, yes," De Bruyne said. "We didn't give anything away except maybe one chance for [Daniel] Sturridge.

"It was perfect for him the way he came in. He was very good on the ball and defensively very solid. He's going to help us to be better and that's why we bought him."