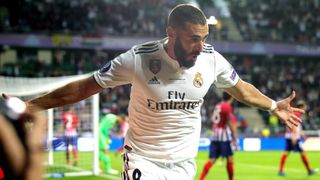 Real Madrid striker Karim Benzema and Liverpool goalkeeper Alisson are among the first five players named as nominees for the 2018 Ballon d'Or.

Manchester City's Sergio Aguero, Madrid star Gareth Bale and Paris Saint-Germain forward Edinson Cavani are the three other players to have been revealed by France Football.

Benzema's inclusion comes as something of a surprise, the 30-year-old having scored just five LaLiga goals throughout last season as Madrid finished 17 points behind champions Barcelona.

However, he did score five times in nine appearances as they won the Champions League for a third season in a row.

Team-mate Bale is nominated after playing a key role in that European triumph, which included two goals in the 3-1 final victory over Liverpool, while Aguero gets the nod after scoring 30 times in all competitions as City won the Premier League and EFL Cup.

France Football will reveal the 30 nominees for the prize, won by Cristiano Ronaldo last year, throughout Monday.