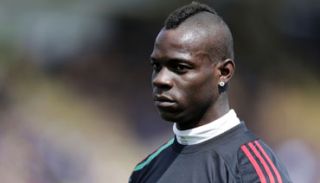 Italy coach Cesare Prandelli and Damiano Tommasi, president of the national footballers' union (AIC), also came out in support of the forward.

Balotelli, in Bologna for Friday's friendly between Italy and San Marino, was livid about the accusations after initially laughing off the claims on his Twitter account.

"In the beginning we joked about it but then I got angry and took it as an insult," he said. "This is a horrendous story and I ask myself how a person... can put people in trouble by telling incredible lies.

"I hate drugs. I went to Scampia with a couple of friends and nothing strange or unusual happened."

Earlier, the striker was given the backing of his international coach.

Tommasi also spoke out in support of the controversial striker who has been involved in a string of on and off the field incidents during his career.

"He can't even have a stroll around town because where he goes makes the news," Tommasi told the ANSA news agency.

"Other than just deny it and carry on with his own business I don't think there's anything else he can do."