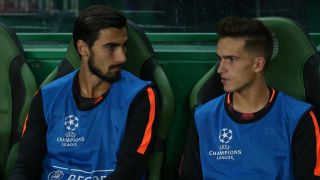 Andre Gomes and Denis Suarez have left Barcelona's tour of the United States to have their injuries assessed, the LaLiga champions have announced.

Both midfielders damaged their hamstrings and had to be replaced in an International Champions Cup game against Tottenham on Saturday.

Gomes is reportedly at risk of being ruled out for up to three months, while Suarez's injury is believed to be less serious.

Barcelona are reportedly open to offers for Gomes, who has struggled to settle at Camp Nou and has spoken about his mental health struggles.

But injury could scupper a move away for the Portugal international, who joined Barcelona from Valencia in 2016 and has been linked to Premier League sides Arsenal and West Ham.

and return to Barcelona today from Los Angeles and will have tests at the Ciutat Esportiva to find out the extent of their injuries.July 29, 2018

"Denis Suarez and Andre Gomes return to Barcelona from Los Angeles and will have tests at the Ciutat Esportiva to find out the extent of their injuries," Barcelona said in a short statement.

Barcelona head coach Ernesto Valverde previously confirmed he was seeking midfield reinforcements, with Paulinho having returned to Guangzhou Evergrande after a single season with the Catalan giants and Andres Iniesta joining Japanese side Vissel Kobe.

Juventus star Miralem Pjanic and Frenkie de Jong of Ajax are among the players to have been linked with Barca, who have signed Clement Lenglet as well as Brazilian duo Arthur and Malcom in preparation for the 2018-19 season.

Barca play Roma and AC Milan in the ICC before Valverde's men take on Sevilla in the Supercopa de Espana on August 12.