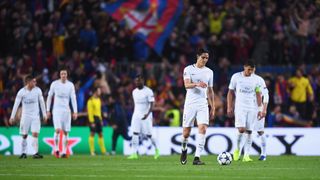 Unai Emery's men were stunningly eliminated in the last 16 after suffering a 6-1 loss in the second leg against Barca, having carried a 4-0 lead to Camp Nou.

But Silva said PSG had already put that defeat behind them as they prepare for a Group B meeting with Celtic on Tuesday.

"We already forgot about Barcelona. It's now another Champions League, something different," the Brazil defender said.

"We want to try to play well [against Celtic] and to have control of the game. We want to get the three points but we are respecting them a lot.

"They are used to playing in the Champions League."

PSG have strengthened since their Barca loss, adding Neymar in a world-record move from the LaLiga giants and Kylian Mbappe, initially on loan from Monaco.

Silva talked up the experience of Neymar and full-back Dani Alves, who have both won the Champions League before.

"Neymar and Dani will bring a lot of positivity and experience," he said.

"We are highly motivated. We want to start already. The preparation was great. The motivation is here in order to try to go as far as possible."