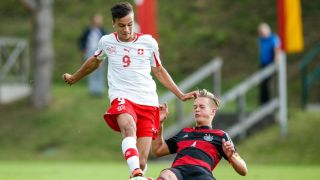 Barcelona have signed Servette youth prospect Jeremy Guillemenot on a year-long deal as part of a new youth football partnership between the clubs.

The Spanish champions announced on Tuesday that the Switzerland Under-19 international attacker will join them for the coming season, after they reached "an understanding in the area of youth football" with the Swiss club.

"FC Barcelona and the Swiss club Servette FC have reached an agreement that will facilitate cooperation between the two clubs in the area of youth football," a statement issued by both clubs read.

"The agreement is a demonstration of the good level of understanding between the two European clubs.

"As a result of this agreement, FC Barcelona's Under-19 team has brought on Jeremy Guillemenot, a player from Servette FC.

"Although Guillemenot is currently in preseason training with Barca B, he will play for the Under-19 team this season."

FC Barcelona and Servette FC to cooperate in the area of youth football: July 25, 2016

He also scored four times in as many games in the UEFA Youth League, in which Servette were knocked out in the second round by Anderlecht.