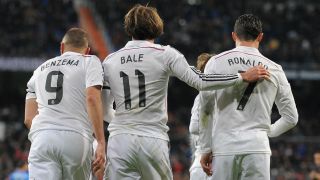 Real Madrid's star trio of Karim Benzema, Gareth Bale and Cristiano Ronaldo will start together for the first time in 279 days after being picked by under-fire Zinedine Zidane to face Valencia on Saturday.

The club's once-revered 'BBC' trident have played together with increasing irregularity over the last nine months, with injuries troubling Bale and form impacting on Ronaldo and Benzema, particularly this season.

As such, Madrid's fortunes have suffered, as they go into the game at Mestalla 19 points adrift of LaLiga pacesetters Barcelona.

Madrid lost 2-1 at home to Leganes in the Copa del Rey on Wednesday, meaning Zidane's men crashed out of the quarter-finals on away goals, piling further pressure on the Frenchman ahead of Saturday's tricky task in Valencia.

279 - Cristiano Ronaldo, Karim Benzema and Gareth Bale will start a game together for Real Madrid in all competitions for the first time since 23rd April 2017 against Barcelona in La Liga, 279 days ago. Trio. January 27, 2018

Determined to not let Madrid's season descend into further farce, Zidane has turned to the previously dependable trio, starting them together for the first time since April 23, 2017 - a 3-2 defeat to a Lionel Messi-inspired Barcelona in El Clasico.

However, Zidane will be without the services of Isco (hip) and Sergio Ramos (calf) through injury.

Ladies and gentlemen, here's your starting XI for this afternoon's LaLiga match against ... | January 27, 2018