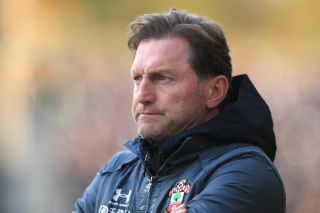 Ralph Hasenhuttl claims Southampton’s humiliating 9-0 Premier League loss to Leicester has made him a better manager.

The embarrassing result was also the biggest defeat in the struggling south coast club’s 134-year history and left them with just a single point from the last 15 available.

Saints manager Hasenhuttl admits the aftermath of the drubbing has been tough to handle but feels the experience has improved him as a coach.

“It has never happened (before) that I lost a game like this. It is very challenging but this is why we are here,” said the Austrian.

“It’s not an easy job, it never is, and in such moments it’s even more important that you be a strong manager and look for the right decisions.

“These days were new for me but I am now a better manager than before and this is the good thing from this game.

“And if the players see the same and learn out of it then they know they are better players in the future.”

Southampton’s players and coaching staff each pledged to donate a day’s wages to the Saints Foundation following the hammering at the hands of Brendan Rodgers’ side.

They responded on the field by showing far more fight during Tuesday evening’s 3-1 Carabao Cup fourth-round loss at Manchester City.

Hasenhuttl was impressed with the reaction of his players at the Etihad Stadium and believes improved performances and results are the only way to atone for recent failures.

“The players are here to play football and not to discuss and this is what they have to do,” he said.

“After 9-0 there is no more discussion necessary. Everybody knows that in that way it cannot continue. And you could see that on Tuesday, it was a much better performance.

“We had a very, very intense game, with 190 kilometres the whole team (distance covered).

“I think it was the longest distance we covered this season, so this was exactly the reaction I wanted to see from my team that they really invest a lot and to defend against such a team you need to invest to cover a lot of distance.

“This was absolutely positive. For us it was important after this Friday game to get back to a kind of stabilising.”

Saints face Pep Guardiola’s champions for the second successive match in the league on Saturday.

Hasenhuttl has been boosted by the return to training of full-back Cedric Soares and winger Moussa Djenepo following their respective calf and thigh injuries.

The pair remain extremely doubtful for the City game but could feature the following weekend when Everton visit St Mary’s, while wingers Sofiane Boufal and Nathan Redmond should shake off minor knee issues to play in the north west.