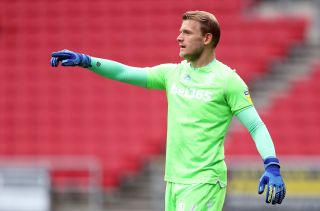 Goalkeeper Adam Davies was the hero as below-par Stoke beat Blackpool 5-4 on penalties in the first round of the Carabao Cup.

Davies saved from Oliver Sarkic and Keshi Anderson to take the shoot-out into sudden death after James McClean and Jordan Thompson failed to score for the Potters.

Bruno Martins Indi and James Husband made no mistake before Tashan Oakley-Boothe scored with the aid of the post.

But Ollie Turton dragged his penalty wide of the left post to confirm Stoke’s place in the second round.

It was rough justice on the Sky Bet League One side who had two efforts cleared off the line in the first half following an impressive display.

James Chester blocked Sullay Kaikai’s shot in the third minute after Blackpool new-boy CJ Hamilton carved out an opening on the right wing.

Davies saved a Hamilton shot after 13 minutes as the Seasiders enjoyed a bright start.

Lee Gregory turned and fired wide for Stoke from 15 yards out after Nick Powell cleverly played him in after 22 minutes.

Marvin Ekpiteta came to the rescue after Turton and goalkeeper Chris Maxwell both went for the same ball, clearing an almost certain goal as Gregory prepared to pounce.

Michael Nottingham just failed to get on the end of Ethan Robson’s 33rd-minute free-kick and Hamilton headed over from Kaikai’s cross shortly after as the visitors continued to look lively.

Bruno Martins Indi performed heroics when he cleared off his own line after Davies parried Kaikai’s cross before blocking Hamilton’s follow-up header under his own crossbar.

James McLean dragged an effort wide from 15 yards despite having time and space before the break, with Benik Afobe also heading at Maxwell after getting on the end of Tommy Smith’s cross.

Blackpool continued to have the better of possession after the restart without being able to create any openings.

Sam Clucas had a low near post cross cleared to safety after he linked up well with Gregory down the left in the 54th minute.

Anderson fired a long-range free-kick well over after he had been brought down by Thompson before Nottingham did brilliantly to stop Afobe in his tracks on the hour mark after the Stoke man had a one-on-one at him following a loose back pass from Grant Ward.

Danny Batth and Chester both headed over as Stoke began to enjoy a good spell.

At the other end, Husband blazed over before Stoke striker Tyrese Campbell had a first-time strike saved as the contest drifted towards penalties.