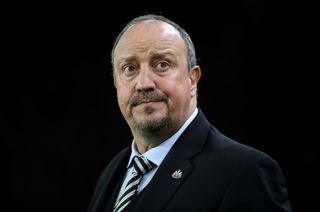 Newcastle boss Rafael Benitez has admitted it was always going to be impossible to replicate last season’s “miracle” top-10 finish this time around.

The Magpies will bring down the curtain on another tough season at Fulham on Sunday with their Premier League status intact and perhaps even with a point more than they managed by the end of the last campaign.

The 44 points they collected last season was enough to secure 10th place on their first season back in the top flight, but they will run out at Craven Cottage on 42, eight adrift of Watford who currently occupy that spot.

Benitez said: “We didn’t realise last year that to finish 10th was a miracle. This year, we expecting that, ‘We finished 10th, maybe we can finish seventh’, and it was impossible.

“You can be lucky one year or you can do really well one year, but to be consistent, you have to have everything in place.

“Also, remember Brighton, Huddersfield and us, we were promoted and we were more or less there. But when you have Fulham promoted or Wolves and they are spending £100million, it could be totally different.

“To be where we are now is a great achievement, maybe not bigger than last year, but it was more difficult, for sure, this season.”

Newcastle guaranteed their place in next season’s Premier League with three games to spare, although that looked a distant hope at the start of the campaign when they went 10 games without a victory and collected only three of the first 30 points they contested.

Asked if a 12th or 13th-place finish was about right for him team, Benitez said: “You could have asked me the same question after eight games and I would have been over the moon.

“At the beginning, you never know. Because the teams that were promoted and also the teams at the bottom of the middle of the table were spending so much money, I think it’s fair enough.